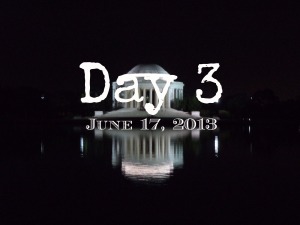 When I woke up this morning, I had two bug bites from last night’s adventures (more on that in a second) and legs that felt like they were done working for the rest of my life. Walking for miles (literally) took a number on them. But in between getting ready for my first day of “class”, I looked over my pictures from last night, and I realized my aching legs were so worth it.

Last night I went to dinner with most of the group and had a blast. Most of the students in this group are graduate/PhD students, so I feel very intimidated. Luckily, they are all so sweet. I kept asking what they got their bachelor’s degrees in. I would love to jump into a master’s program when I graduate in a year, so I was curious to see what they wanted to do with their respective degrees.

We walked past the Eisenhower executive office building

Afterward, me and three other group members took on a self-guided night tour of the front side of the White House, the Washington Monument, and the Jefferson Memorial. If I’ve ever had a more magical experience than the several miles of walking we did last night, I can’t remember it.

We got to the front of the White House just in time to see both the last rays of light from the sun in the sky and two helicopters land right in front of us in the White House lawn!! They were so close overhead I thought they were going to land on top of us. My group speculated that since the President was still overseas, the person in one of the helicopters couldn’t have been him, but the passenger could have either been the First Lady or the Vice President.

By the time we walked up to the Washington Monument, it was completely dark and the fireflies were out. One of our group, Ryan, plopped down in the grass and lay facing the Monument contentedly. The rest of us followed suit (though I took creepy stalker pictures of my group before I joined them).

Laying in the grass, gazing up at the very symbol of our nation (and my favorite part of Washington, D.C.) is an experience I’ll never forget as long as I live. It was the most perfect few moments – just laying peacefully, looking up at the incredible monument that represents so much. It didn’t matter to me that construction rings were around it as it was being refurbished. It was still the most beautiful structure.

Yes, I took a picture of myself in the grass in front of the Monument. No judging.

Eventually we got up and hiked around the Tidal Basin in order to get to the Jefferson Memorial. It did not seem real. It shone ghostly white in the distance, seemingly reflected both in the water and the night sky. When we got inside of it, I swear the light was coming from the memorial itself. The walls and statue of Jefferson on the inside shone and contrasted so beautifully with the darkness all around us.

We lay down in front of the Jefferson Memorial, too, our backs to the memorial, feet swinging out over the water, gazing at the light-polluted sky. Another peaceful, perfect few moments.

After a while we walked the mile or two back to our dorms and promptly crashed (or at least I did). This morning was our very first day of class/lectures, and I wanted to be rested.

It was a long walk to our ASU Washington, D.C. center, one that I certainly didn’t think that a hypoglycemic could handle in the mornings. But I made it, I survived, and it was a very interesting day.

During the morning our faculty director told us what to expect this week and we all went over our research projects for the group. I volunteered to go first. I knew I would be too scared to talk after hearing the grad students go into their projects!

*After lunch we got to hear our first guest speak to us about the complications of making, presenting and passing the federal budget. The process is, apparently, ridiculously complicated. While our guest taught me so much, he also confused me tremendously! Afterwards we heard from another guest who spoke to us about how politics play a role in defining what science means. I have to say, my peers are fiercely intelligent. I’m learning as much from their questions as I am from our speakers’ answers.

Now I’m here in my dorm, relaxing with the other girls I’m sharing this room with. I’m so grateful for the experience of being out of my element here. I’m not used to sharing a bathroom with four other girls, and I haven’t slept in the same room as anybody else since freshman year. We get our own dorms when we get to London, but I’m starting to get a little nervous. If I feel slightly homesick now, I can only image how I’ll feel when I’m outside the country. All the same, I am so, so excited.

I got chicken tortilla soup to go from a Corner Bakery on our way back. It strangely reminds me of home.

*Our study abroad experience consists mainly of meeting with federal officials and getting the privilege of hearing them speak on a particular subject relating to sustainability, policy, and/or governance. Because our discussions are strictly off the record, I can’t go into a lot of detail regarding who was speaking or what precisely was said. I can, however, give a general overview and talk about what I learned.