After several months of having some severe problems with my computer, the poor thing bit the dust this morning when I tried to turn it on to write this blogpost. But because I’m impatient and wanted to write this blogpost now rather than post-Apple store, I’ll be telling you about our trip to Vegas from my phone.

That said, I really dislike texting and writing from my phone feels like one long text. So at one point or another I’m probably going to let the pictures do most of the talking. 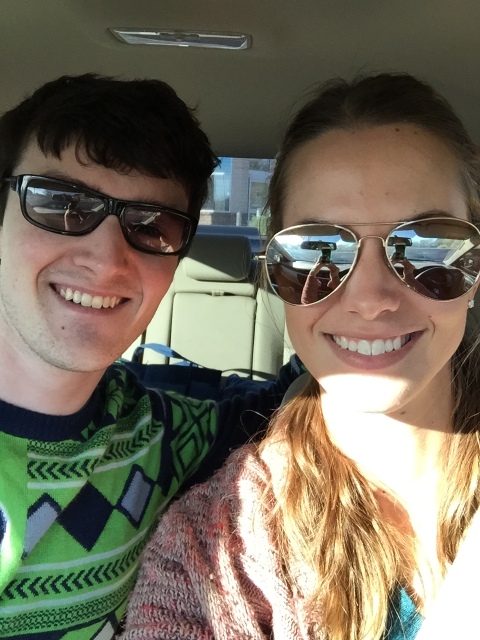 Alex and I never get any time off together. He works Monday-Friday, I work Saturday to Wednesday, so we don’t even share weekends. We don’t get a whole lot of vacation time, nor do we get holidays off (horses still have to eat on Christmas!).

So, when I decided I could use a few vacation days and okayed some time off with my boss and Alex learned he could take some time off the last week of 2015, we jumped at the opportunity to do something fun together that wasn’t sitting around at home with our cats.

After some debate, we decided on Vegas. We work so hard throughout the year and are so conservative with our finances, and we both thought we’d earned a trip.

We booked our hotel at Harrah’s and made no further plans after that since primarily we just wanted to wander and sightsee – that and gamble just a little bit! We’d practiced blackjack for a while and were ready to hit the tables in casinos.

The trip up there was so uneventful. 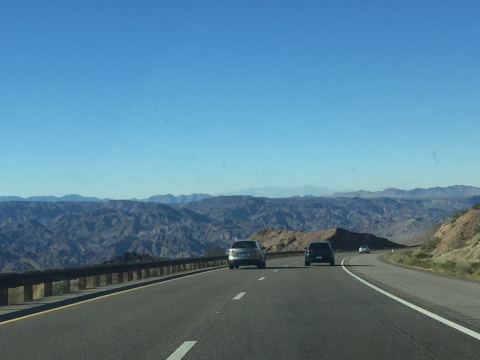 Well, I take that back. We had a blast on the way up since we had music to listen to and snacks to eat and each other to entertain. But you basically go through desert and cliffs to get to Vegas, although I found awesome things along the way: Old buildings and structures and awesome prickly trees.

When we got to Vegas we went straight to our hotel to check in. When we walked in the hotel/casino, it was maybe a little before 2. By the time we actually found the check in place, it was close to 2:15. The line was crazy and was made crazier by all the people bustling around us, headed to the shops or the casino in the hotel or wherever. And each check in seemed to take 15 minutes each. There was a guy working the line, which is to say he asked individuals, “Normal check in is at 3. Would you like to pay the $33 fee to check in now?” Oh but if we had a rewards card we could check in now. And we could get rewards cards if we went to stand in another line to get them. But that meant getting out of the check in line, which was already to the door across the lobby.

My temper was up at this point, but Alex gently encouraged me to go get the rewards cards so we didn’t have to pay a stupid fee. So we went and stood in another line, got our cards from an indifferent cashier, then went to stand back in the check in line. By the time we finally got to the counter, it was past 3 and I was seeing red. My poor boyfriend. He is a rock. He kept hugging and kissing me in line and making me smile even as we waited longer and longer.

At the counter we were then informed by the assistant that we had checked in online and need not have stood in the line at all. Oh, man. I all but demanded the manager’s number at that point. The assistant seemed exasperated and sympathized with our inconvenience. When she asked which number I wanted, I realized that whoever it was I spoke to probably wouldn’t care anyway and said never mind.

I’m rambling about this poor experience so much but it played a big part in our trip since we ultimately decided to switch hotels. But we might have rolled with this bad customer service had we walked into a gorgeous hotel room with a great view (which we’d paid extra for). We’d seen pictures on the website and were excited.

Instead we walked into a dingy, dark room that looked decades old with a giant pilar in the middle, a view of all the other hotel rooms across from the pool, and which was small enough to fit in our living room.

I actually cried. I sat down on the uncomfortable bed and sobbed out of pure disappointment. We never went on vacation and when we did, this was what we got? And after 30 minutes of talking it over, we decided screw it, we’re switching hotels whether or not we get a refund. And the place that happened to have a room available on such short notice within our price range? The Trump International Hotel. (Don’t make fun.) We didn’t care.

We got our stuff, went downstairs, demanded a manager, and waited in line again to speak to him. Having worked in retail for years, I consider myself to be very kind to people so long as they do their jobs. Alex did most of the talking, but I didn’t hold back here either. And the guy gave us a full refund with no argument.

And then our vacation started.

We pulled up at the Trump hotel and were immediate greeted by a smiling attendant ready to help us with our bags and take our car. We walked into a gorgeous hotel lobby with chandeliers, Christmas decorations, and beautiful designs on the walls. We were checked in by a lovely lady who gave us good tips on what to see while we were there. And we went up to our room, opened the door, and just. wow. The room was huge with a couch, coffee table, arm chairs, a stove and microwave and coffee machine, a gorgeous desk and insanely comfortable bed. And the bathroom had an enormous shower and a jacuzzi tub you could practically swim in. It was awesome and changed our experience almost at once.

And we got ready, bundled up, and headed out.

Vegas is so alive at night. Everything is lit up and the energy of everyone walking around is intense. All the people seem to be in a constant state of awe and excitement. I was one of them!

We walked to the Venetian and had dinner at the Grand Lux Cafe, which was amazing. We also went into one of the big shopping malls since it was cold and Alex didn’t have a coat. Since he didn’t find anything he liked he ended up wearing one of my Ohio State sweatshirts for most of the trip! And then since I had leftovers from dinner, we went back to our room to put them in the fridge, then caught our hotel’s free shuttle service to Caesar’s Palace. (Later we started calling the shuttle the Trumpmobile since the shuttle had TRUMP on it.)

In Caesar’s Palace we learned that casinos really are a maze, there really are no clocks on the walls nor are there windows, and lots of people are either smoking, drinking, or both. Alex was determined to find a cheap blackjack table, and while we didn’t find any our first night, we did hit the slots! Admitedly they were more fun after I had a drink. I lost a grand $15. My dad once told me never to gamble more money than what I was willing to lose, and I never forgot it. Alex ended up winning $25 after he put in $15 too.

We walked around some more and caught one of the fountain shows in front of the Bellagio.

It was absolutely gorgeous! There are different fountains so the jets can do different things and they blend together so well. At one point the water must have been 100 feet in the air.

We wandered around some more in the Bellagio and in Caeser’s Palace. I was more impressed with interiors and decorations than I was with the casinos. 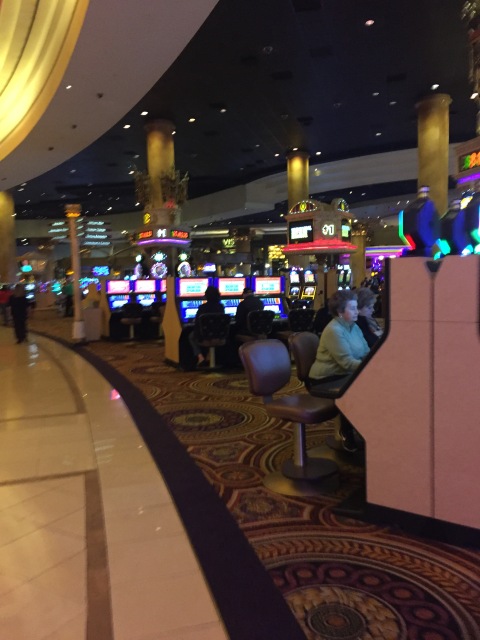 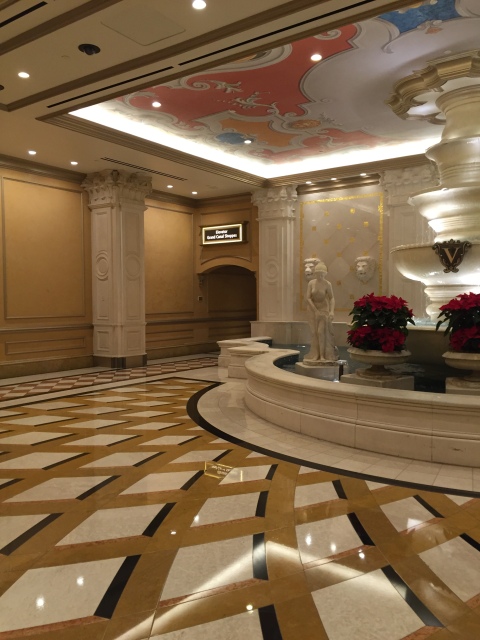 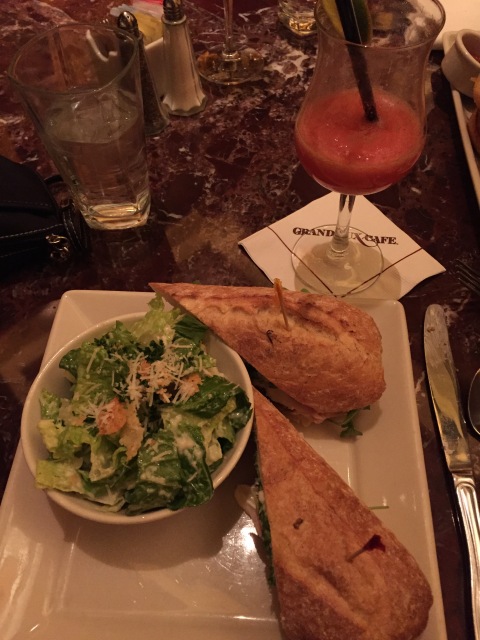 After a while I stopped taking pictures. It was just awesome to soak everything in, plus after a while it got hard to take pictures in crowds without being a dick. Because one other thing we learned is that most people in Vegas have no concept of public awareness. Everywhere there were people parked randomly in front of doors on their phones, taking pictures in narrow walkways, groups of women walking leisurely along arm and arm blocking paths, parents with strollers crossing in front of us with no warning – all kinds of crazy! At one point at a stoplight there was a lady having her picture taken by her husband and he was ten feet away from her, waving at a hundred people to go around as to not walk in front of the camera. We plowed through in between them and I called, “Guys. Not the best place for a picture!” To be sure there were lots of people who didn’t think the world revolved around them too, but boy did those others make me laugh!

We finally caught the Trumpmobile back to the hotel close to midnight after getting lost in Caesar’s Place there for a while! The next morning we slept in a bit and headed out to the Strip again. We got lunch at the Henry at the Cosmopolitan, and their lemon chicken was probably the best I ever had. 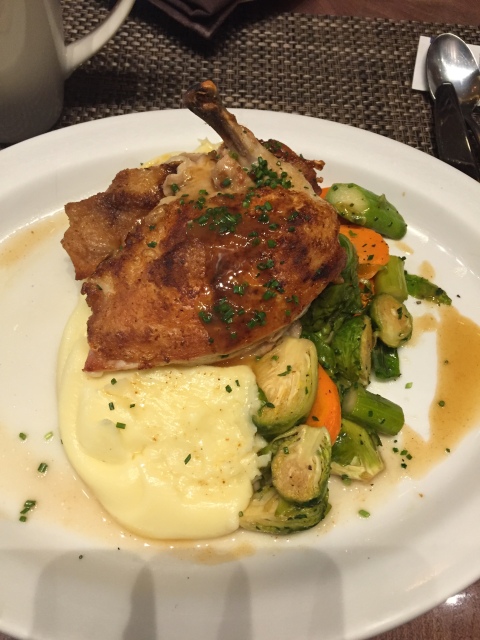 Again I had leftovers so we went back to drop them off. We poked around the Trump gift shop a bit then headed back out in the Trumpmobile. The drivers in the shuttles were seriously fantastic, joking with us and giving us great advice as to where to go.

We walked all over everywhere: The Paris casino and hotel, the MGM Grand where we finally got to play Blackjack (and didn’t win anything), the Cosmopolitan again where I got their famous cosmopolitan cocktail and I lost another $15 at slots (and Alex won another $25!), the Bellagio again where we caught another fountain show, the outside of New York New York, and probably others I’m forgetting! 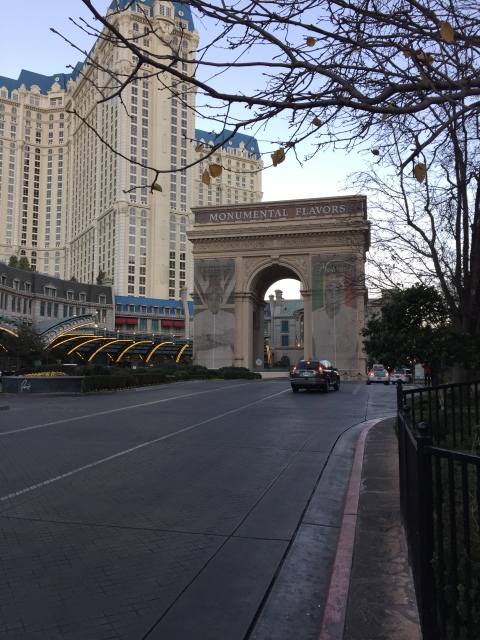 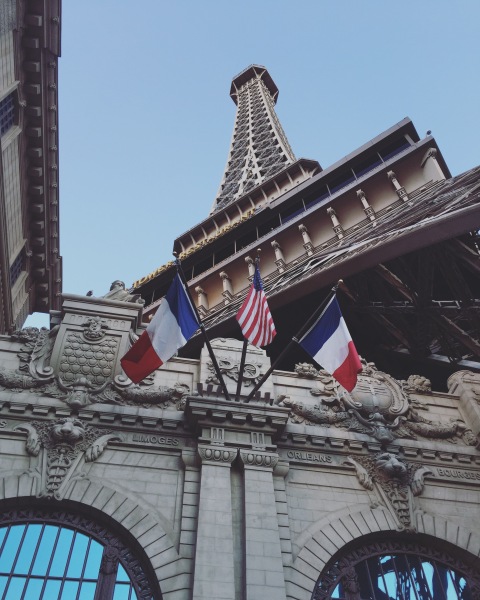 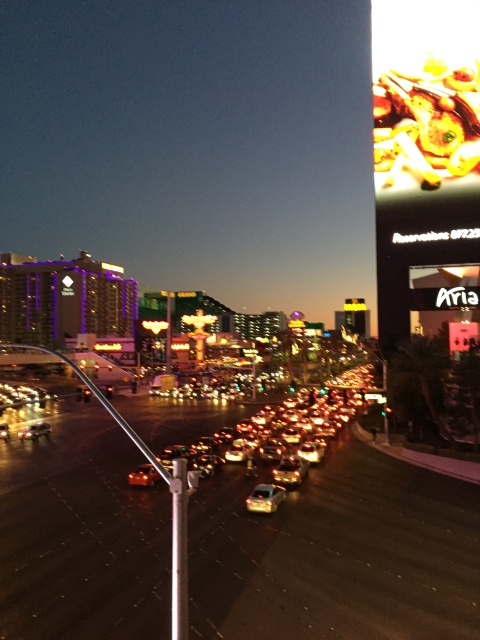 The best part of all of this wasn’t the great food or playing slots or blackjack. It wasn’t even exploring new, cool places. It was walking hand in hand everywhere with my boyfriend.

No, we didn’t get hitched!

It didn’t matter what we were doing – we had so much fun doing anything and everything. Finding fries for a snack during the night, giggling over bits of conversation we overheard, finding different slots to play and laughing over how they made no sense, snuggling close as we walked since it was so cold, watching the lit up fountains at the Bellagio…it was all amazing.

Since we stayed out so late the night before, we had the Trumpmobile take us back to our room early. We got room service and may or may not have totally eaten it in bed. 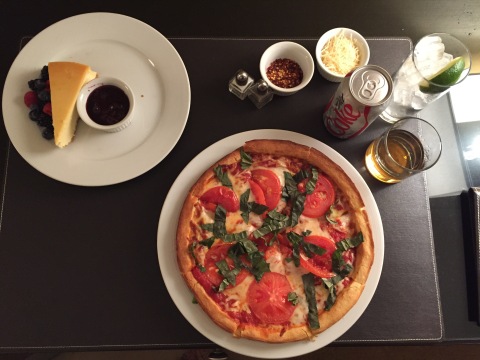 The next day we went to the mall again for a few souvenirs…and Alex also convinced me to get a dress I’d seen on our first night and fell in love with. We checked out of the hotel and made the trek home, again with music and snacks and lots of fun along the way.

We wanted to go to the Hoover Dam but the line was so long! It was cool to drive over it though.

Tonight for New Years we might go to the Talking Stick to play a bit more blackjack and so I can wear my new dress. Hey, I’m still on vacation till Saturday!

And this little vacation was perfect.

You are currently reading Las Vegas Trip 2015 at Shorts and Snippets.