I briefly entertained the thought of taking this day easy when I woke up with the sun this morning (6am London time, 10pm Arizona time).

And then I proceeded to explore city for nine straight hours.

I woke up with no plan, really, though I did have a two-hour Tube tour booked to which I hadn’t been 100% committed. I ended up going, then filled the rest of the day with impromptu stops and visits and tours. And thirty-nine flights of stairs (that Underground, man!), 18,848 steps, 7.5 miles, and forty-seven thousand pictures later, I’m back at the flat, making myself rest so I can write it all down. Plus my legs are killing me.

I thoroughly enjoyed staying in bed for an hour after waking up then taking my time eating breakfast in my host Farah’s gorgeous little dining area with panoramic views of Northern London. After 36 hours of looking like a total zombie, it was nice to also take some time to put on makeup while trying to decide the answer to the only question I had to ask myself: “What do I want to do today?”

At 8:30am, I left the flat and decided I would take the Tube’s Northern line (nearest line to the flat in Shoreditch) to Piccadilly’s line and go to Piccadilly circus. If you didn’t know this about me, I’m kind of obsessed with that name.

I have a pretty good sense of direction and have already figured out how to get to my closest Tube station without looking at my phone for directions. I got to Piccadilly Circus with no incidents and happily climbed up the stairs up to see the famous statue with my own eyes once again. 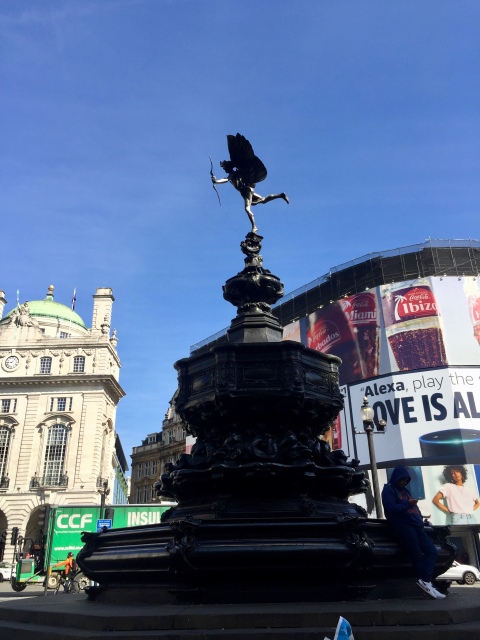 I’ll have to go back when it’s out of the shadow for more pictures.

Then, because I still had just under two hours before having to show up at Paddington Station for my tour of the Tube, I made the short trek over from Piccadilly Circus to Buckingham Palace. 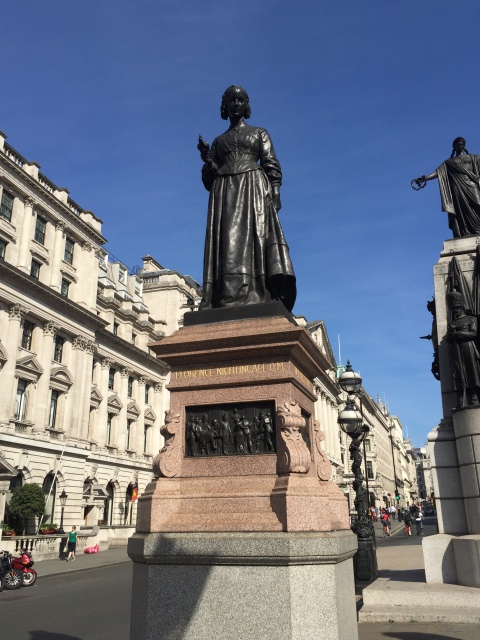 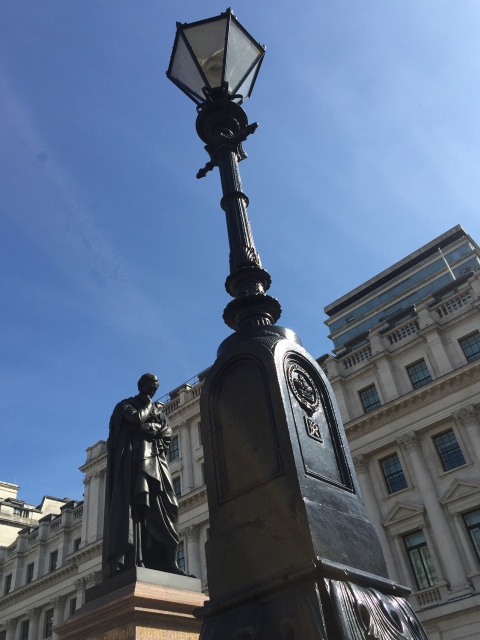 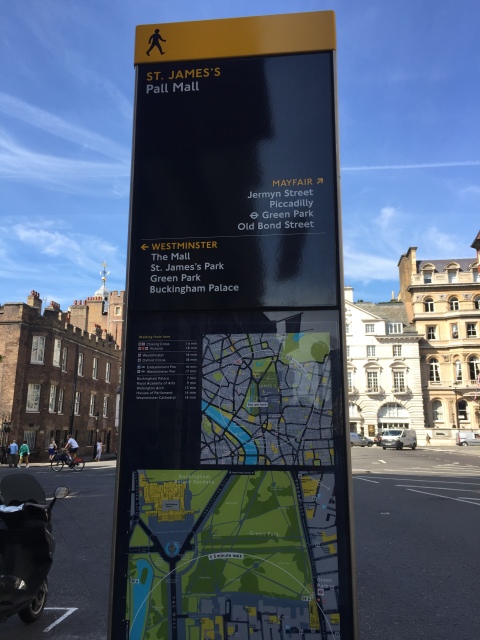 I hardly looked at the map. Instinct. Pure instinct and memory guided me towards Buckingham Palace. Rather than walking through Green Park first, I wanted to approach the Palace through the Mall (the street leading directly to it). 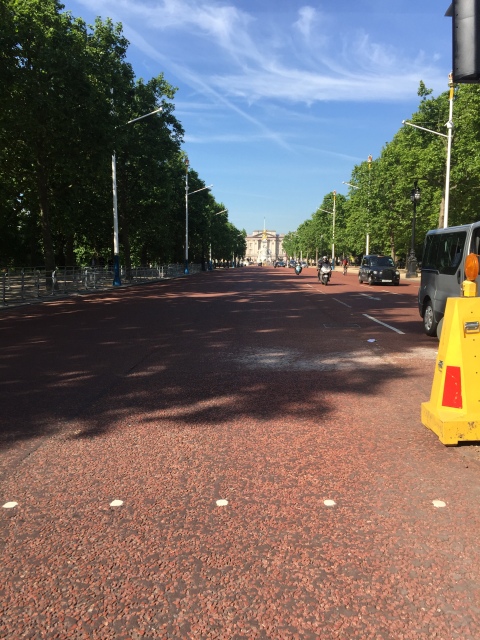 It was like seeing an old friend once more.

There were at least a hundred or two hundred people – well dressed – handing blue tickets to armed guards in front of Buckingham Palace’s gate and being admitted to walk through the side gate for what was clearly an upscale event or showing of some sort. A few of them were wearing what resembled Boy Scouts of America uniforms. I asked a few fellow observers if they knew what was going on but they had no clue. Later, while I was talking with another tourist on the Tube tour, I mentioned what I’d seen and she wondered if it had anything to do with the Manchester bombings. I wish I knew. 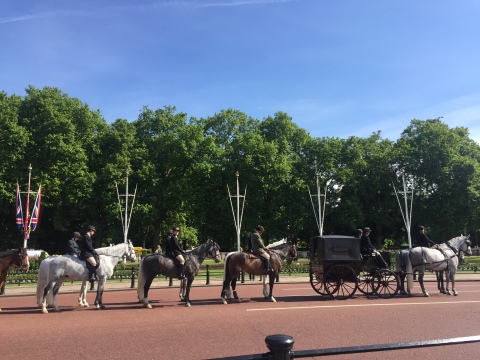 I poked around Buckingham Palace for a little while then walked through the beautiful Green Park to get back to the Tube.

And maybe it’s just because I’d been dreaming about every detail of my first trip to London for so long, but four years later, I still remembered the same path I walked the very first time I went through that park.

I still remembered which little gate I’d stopped in front of to adjust my flats I’d worn back in 2013.

I still remembered which field I’d run to in excitement over seeing tall grass, the field where this picture was taken: 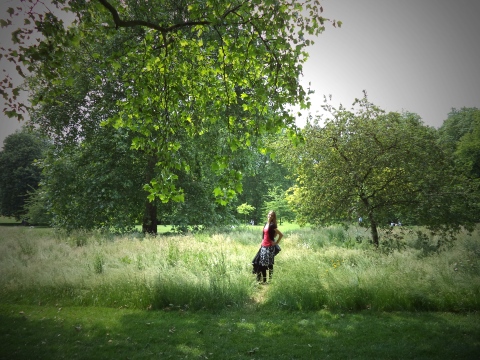 Four years later, I knew exactly which way to go.

My brain has a funny way of doing things like that. I might forget what I had for breakfast last week, but throwing me back into London was honestly like throwing a fish into water.

That time around Buckingham Palace and my time in Green Park were just amazing. As in, I was amazed by my surroundings and by how I truly felt like I’d melted into the backdrop and had become a part of them.

On I eventually went back to the Tube and to Paddington Station. I arrived with just enough time to meet my tour guide and four other tourists so I didn’t get a chance to explore, but I do plan on going back and getting a famous Paddington bear. (Because they’re so well known and I don’t know when I’ll be back in London during my lifetime, the super mushy part of me wants to bring one home for my future son or daughter. No, that’s not an announcement.)

For the next two hours, I hopped around the Tube while learning some interesting points about its creation. The Tube was the world’s first underground train system and it was incredibly innovative for its time – so innovative, in fact, that so many people were opposed to it, church leaders going so far as to say its creation would be the beginning of the end of the world since they would be digging straight to Hell. With the idea first introduced in something like 1830, the first few stations weren’t launched until the 1860s and then the trains that ran underground were still steam powered, causing health hazards for everyone involved.

As we jumped around from line to line – District to Circle to Central to Piccadilly to Westminster – I also learned about the early rivalry between two lines (Central and Metropolitan); some of the most influential people involved in its creation including Frank Pick who came up with the circle brand; and the ongoing creation of more and more stops underground and how efforts were taken to ensure they were built under roads as to not disrupt the foundations of old buildings. In fact, our tour guide said, Big Ben tilts slightly to the northwest due to excessive digging underground back in the day! 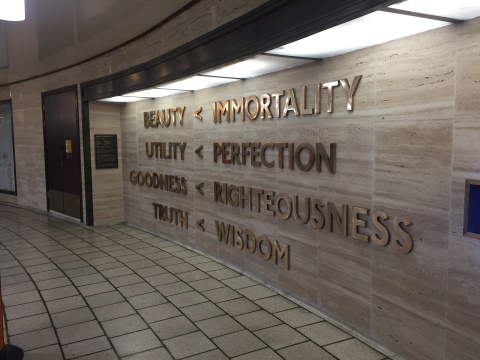 A rather morbid fact is that apparently while they were digging to build one of the stations (can’t remember which one!) they found thousands of human skeletons. Turns out they’d stumbled upon a body pit from the time of the Black Death!

The tour was great, but truth be told I was glad it was only two hours as jumping around the Underground so much (after walking a few miles around that morning) was draining! Many of the stations are accessible only through flights of stairs although escalators play a big role, too.

Since we ended the tour at Westminster station (the Big Ben/Parliament/Westminster Abbey stop), I headed out to gaze up at Big Ben again, got a wrap and a latte from my favorite London coffee shop of all time ever and ever, and happily sat to eat by Westminster Abbey and with Big Ben right in front of me.

There was an experience. Casually eating lunch with two of the most famous buildings in the world right beside me. 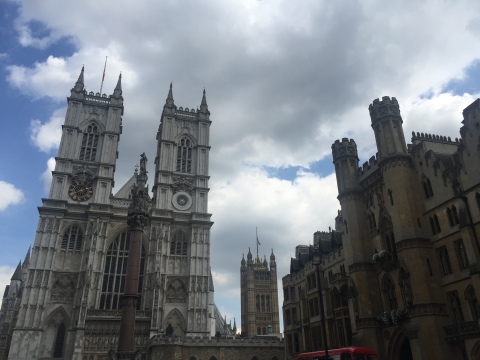 The line to get into Westminster Abbey was extremely long and I wanted to be a bit more full of energy before exploring it again, so instead I walked down to see more of the Parliament building and then down the bridge over the Thames about halfway so I could get some shots of Big Ben with the river.

I also ventured away from Parliament Square because I heard a band playing in the distance and wanted to know what was going on. A parade of sorts was occurring near a war memorial, and it turned out that soldiers and onlookers were paying homage to fallen warriors.

As I was walking around I couldn’t help but notice – most particularly surrounding the parade – heavily armed and uniformed police officers and soldiers, eyeing everyone solemnly and patrolling the heck out of their areas. And this could have something to do with the awful bombing in Manchester … but I couldn’t help but notice that most of these men and women are heavily armed. As in, AK-47 machine guns in their hands, fingers on the triggers, ready for immediate action.

But there’s another side to that, too, which brings me to another incident I witnessed. As I walked by Parliament, I saw one woman outside the main entryway (blocked off and guarded, of course) was yelling to the passing crowd about the importance of electing one particular man. She was angry about something, but I missed the first half of her rant so I can only guess she really wanted her person of choice in office. People passed her uneasily.

A female police officer, a tall and beautiful woman with blonde hair, approached the shouter quietly. And she proceeded to put a gentle hand on the woman’s shoulder in what I swear seemed to be a motherly fashion as she concernedly inquired about the woman’s level of noise. The protester – if that’s indeed what she was –  finished her sentence in ringing tones, then nodded to signal she was done and finished with a loud, “Thank you, officer.”

As I was walking away, the angry woman and that police officer were engaged in nice conversation.

It was amazing. But then again, everyone here is orderly and respectful and polite. Everyone quietly goes about their business, murmuring a soft, “Sorry,” if they have to cut in front of someone or else chatting nicely with their friend or business partner. Even on the Tube, commuters are silent as the grave besides the rustling of papers every so often. No one talking loudly on their phones, listening to music outside their headphones, or otherwise being disruptive. No one has a sense of entitlement, and it’s wonderful.

I had to take Westminster to the Green Park stop (right next to Piccadilly and even closer to Buckingham Palace) to switch lines to get back to my Airbnb flat, but on a whim I climbed the stairs, rode an escalator or two, then walked back outside at Green Park, thinking I’d go see if Buckingham palace was quieter and if I could perhaps find the Royal Mews. 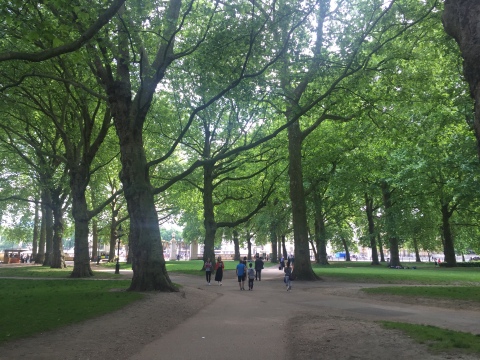 The Royal Mews tour was amazing, and seeing the horses? Just heavenly. 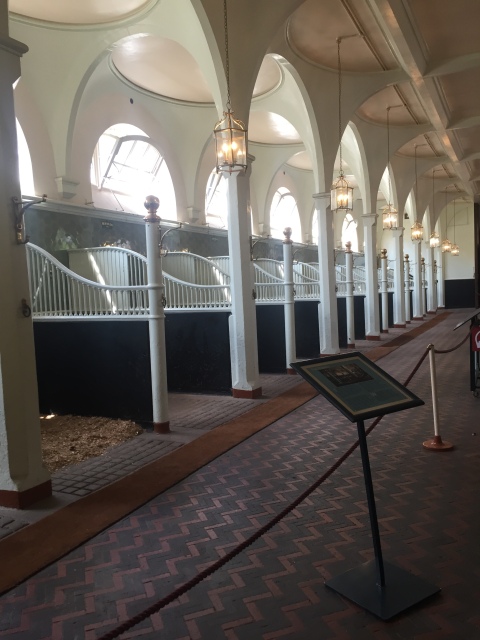 I asked about their hooves, and apparently they wear heeled shoes for extra support against the hard, concrete ground and receive farrier work once a week! (For you non horse folks, typically a horse gets newly shod and trimmed every six-eight weeks.)

We got to see the Royal Mews’ version of a tack room, filled with harnesses and bridles that are a century old and still in working condition (and one of the worker’s dogs – the families and pets of workers live on site at the Royal Mews). 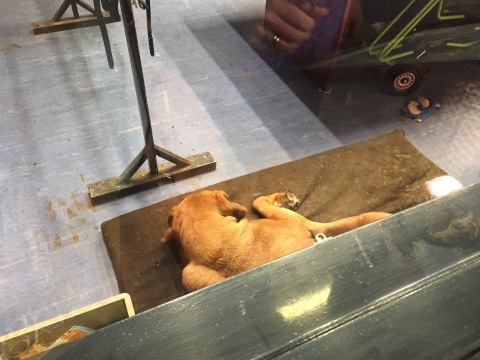 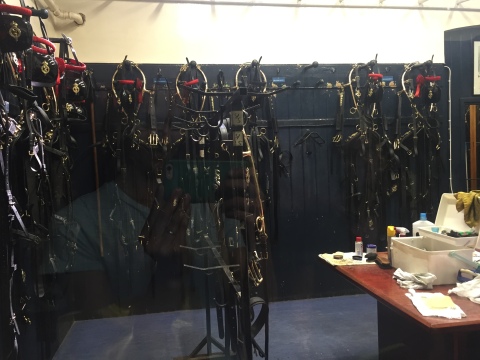 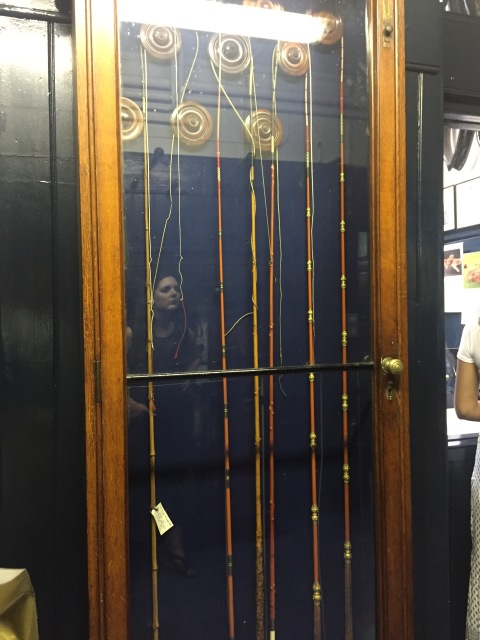 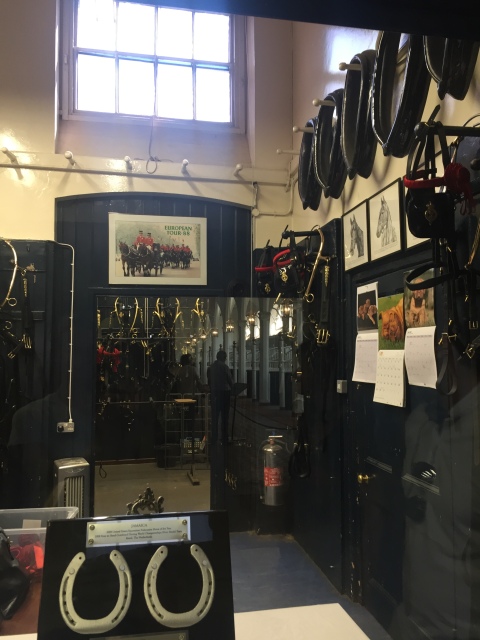 And we got to see the beautiful carriages, which remain in use today. 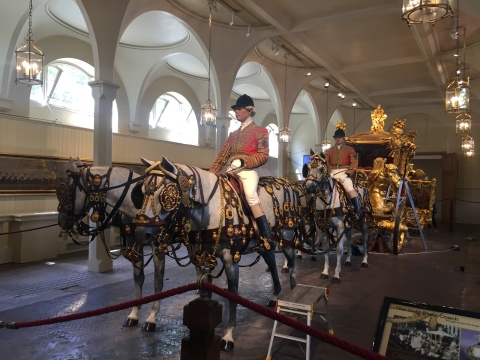 I explored the gift shop a bit, and then, with 4% phone battery left, I finally decided to head back to the flat, stopping first at a grocery store a few blocks away so I could cook something simple for dinner and also got some snacks for later (buying to-go food was getting old).

Today was amazing, truly. And tomorrow I have another day of doing whatever I want, then Friday I set off for a day trip of Bath, Windsor Castle, and what I’m looking forward to the most, Stonehenge.

For tomorrow, I haven’t decided if I’ll go to the Tower of London, the British Museum, the Natural History Museum, or finally to Westminster Abbey’s walk-in tour. I also want to go to the Royal Observatory sometime, and Kensington Palace. And get my bear from Paddington.

So much to do, so little time. As the tour guide on my London Underground tour jokingly told me today, “You’re going to need a vacation after your vacation!”