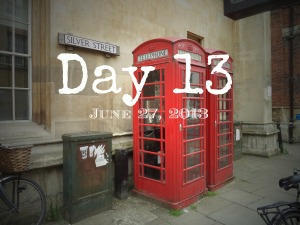 So I’m pretty sure getting completely lost in a foreign city should not be as fun as it was for me today. But I’ll get to that later.

Other than waking up feeling as though a giant weight had been dropped into both of my lungs, today was a pretty good day. I feel a horrible chest cold coming on, and I’m hoping that either it will resolve itself by tomorrow or that more symptoms wait until Tuesday to surface. I want to have my energy for this weekend!

We walked to King’s Cross Station this morning, something I was absolutely thrilled about since saying I’m a Harry Potter fanatic is the understatement of the century. Unfortunately we didn’t get to go to platforms 9 or 10 as we boarded our train to Cambridge University, but I thought it was still cool to be at the same station referenced in the books (and shown in the movies).

Our group got on our train. It was a 45-minute ride to Cambridge, and I expected to be pretty bored during our trip. I ended up not ever wanting the ride to end. I zoned out completely and looked out the window at the beautiful English countryside. It was indescribably beautiful. Once we got out of the city, we passed field after field of green grass separated by hedges (hedges are essential in British agriculture sine they keep plants from crossbreeding), trees, bushes, herds of cattle and sheered sheep, and flowers. So many flowers, none of which I’ve ever seen before. There were fields of thousands of bright red, yellow, white, blue, and purple wildflowers that I could have looked at forever. I stopped taking pictures after a while. I just wanted to watch the flowers go by.

We got off the train and began the walk through campus to our first meeting, me automatically falling behind. My faculty director walked next to me, at my pace. I apologized for being slow, insisting I was walking as fast as I could.

“It’s all about where you’re from,” he said cheerfully. “Ryan up there’s from New York so he knows how to walk to get to places. A.J.’s from Virginia and visits D.C. all the time so he’s learned to walk at a fast pace, too.”

“I’m from Cave Creek,” I offered, and he snorted.

“Then it’s lucky you have a pace at all,” he laughed.

We went to our first meeting before the group split up for lunch. Fed up with having to practically run after all the fast walkers, I went off on my own to Nero’s café for a sandwich and tea. That tea was a godsend; my lungs were really hurting in the morning. Being able to walk at my own pace also gave me plenty of time to take pictures.

After our final speaker for the day I took the train home alone, since everyone else split off into groups to do some activity at Cambridge: tours, punting, etc. I only got lost on my way to the train station once. I stepped into a cute little bakery and asked the owner for directions.

“Right, then,” he said, walking outside his shop with me and pointing me in the right direction. “You’ll want to go down that way, till you see a war memorial on your right. It used to be in the center of the road, but they moved it. The traffic absolutely roars. When you get to the memorial, turn left. You’ll hit it just a little bit down.”

I barely heard the directions; I was too happy to just listen to his accent. I thanked him, went on my merry way, and got to the station in time to board a train headed to King’s Cross. I felt so out of place getting on the train, as there was some initial confusion amongst me and several other passengers on the platform as to which was the right train. As we all spoke to one another, everyone talked with a British accent – well, I guess for them they talked normally. I was the one talking with an accent, and I almost didn’t want to speak for fear of giving myself away. A few of the passengers glanced twice at me before settling into their seats once we were all on the train.

45 minutes later, the train pulled into King’s Cross, I looked hopefully out the window to see which platform we were on. I had heard that some reference to Platform 9 ¾ was somewhere around platforms 9 and 10, and I really wanted to see if the rumors were true. Well, luck was on my side as I saw the number on the wall: Platform 9. Booh-yah.

I skipped off the train and looked around like a moron, hoping to see something, and I wasn’t disappointed.

Oh, how I wish I could have gone through that wall.

It took me an hour and a half to find my way back to my dorms – a walk that should have taken 20 or 30 minutes. I wandered around contentedly, consulting maps andcreepily listening to snippets of conversation as I strolled along. After it had begun to rain I was able to find my way back to the familiar neighborhood, and I ran into a convenience store to buy dinner. And tea.

King’s Cross Station was definitely the highlight of my day. That and seeing all those beautiful flowers during the train ride.

I can’t believe that tomorrow is the very last official day of my study abroad program. As far as academics go, I have learned so much more than I expected to learn through this trip. Creation and implementation of policy, the science community within government, roles of agencies and institutions, the differences between the U.S. and U.K. governments, the delicate balances of power, and the way everything clicks together to make a functional bureaucracy are just a few of the things I’ve had the privilege of learning about from professionals in the field. I wish I could share the names of the people we have spoken to, but since our sessions were strictly off the record, I can’t. Let me tell you, though, they really knew their stuff.

Saturday and Sunday I’ll be buying souvenirs exploring Westminster Abbey and the Tower of London. If I feel brave I’ll go up on the Eye of London, too. What I really want is to find a shirt that says Piccadilly.

Part of me can’t wait to get back home. The other part of me – the part that thoroughly enjoyed getting lost in central London – never wants this trip to end.