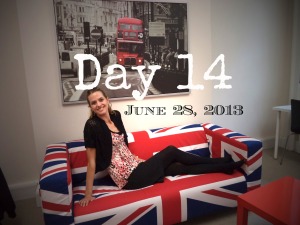 When I woke up this morning, the first thing I thought of was the fact that today was our very last day of this study abroad program. At first this was met with joy. And then, mere moments later, it was met with sadness.

For two weeks I have been with this awesome group. The fourteen of us (thirteen plus our amazing TA) have eaten meals together, lived together, and learned together for the past fourteen days, and while it took some time to adjust, I have really enjoyed spending so much time with them. A few of the group leave tomorrow, and the rest of us are flying out on Monday, but we’re all doing our own thing this weekend. I’m going to miss them a lot – more than I realized I would when I first started out two weeks (years?? eons??) ago.

Our final day was a quiet one, with only two speakers to listen to, and then we headed back to our London headquarters for a debriefing session. That’s when it really started to hit me. That debriefing session would be the last time we all were together as a group.

We talked about what we had learned over the past two weeks, and as we reviewed each and every session we had sat through and touched on every point that had been made, our faculty director mentioned that the first time he had done an experience similar to ours, it had taken him a good year to fully digest everything he had been taught. I was surprised at first, but now, looking back over my notes and really stopping to think about everything I have learned from people so high up in government (both in the U.S. and U.K.) I can’t even write their names here for confidentiality reasons, I believe it. I have been fortunate to learn so, so much. I wouldn’t be surprised if it took me even more than a year to really take in everything.

We talked about ways to improve the program for next year as well, as we had been the guinea pigs for this particular study abroad experience. We reflected some more. We laughed. After two hours, we each went around the room and gave our final thoughts on the program. I told everybody that I had learned as much from them as I had from our speakers, and I meant every word.

I thought what one of the PhD students said was absolutely amazing, and it certainly had everyone in the room in hysterics: “My graduate program has been a slow descent down the rabbit hole of disillusionment with society,” he noted. “This program has helped to further that decent.” It was true. We were given a huge, hugedosage of reality as to what the functions of government really are and the enormously complicated process involved with policy creation and implementation. It’s information that I’ll value for the rest of my life and information I know will help me begin my career.

I’m going through so many different feelings and emotions today that I don’t think it’s possible to write them all down. All I know is that part of me never wants to leave London or stop traveling. I have Saturday and Sunday to spend doing whatever I want, and then I leave for the desert on Monday. It is really starting to sink in.

On a totally unrelated, random note, it occurred to me earlier today that the Fourth of July is days away! It snuck up on me, what with me being out of the country and all. I’m so, so happy and excited – the Fourth of July is my favorite day of the whole year, and the fact that I was just in D.C., the capitol of our nation, will make it even more special for me this year. One day, I’m going to be able to stand in front of the Reflecting Pool, with the Washington Monument standing tall against the sky, and watch the fireworks go off over it. I know that as I watch the fireworks this year, I’ll think of that as I do every year, and I’ll remember my trip.

Before I went to get dinner earlier, I stepped into a little souvenir shop to buy postcards. I also bought a little stuffed bear decked out in British royal guard attire. I’ve named him Piccadilly.