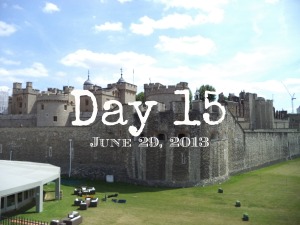 What an amazing day! It was my first in London that wasn’t dedicated to school or getting sick due to nerves. I can hardly believe that I flew into London just a week ago. Honestly, it feels like I arrived years ago.

This morning I got up early to take the Tube to Westminster Abbey. I waited in line to enter the beautiful building, almost shaking with excitement, and I overheard the greatest conversation ever between a little girl and her father:

The dad snorted in an amused, defeated sort of way, but I could almost hear the crabby-looking mother silently count to ten.

When I got to the visitor entrance to the Abbey, my heart sank when I saw a huge “No Photography” sign just outside the door. Such an amazing, historic building with so much inside and I couldn’t even capture the memories?

My disappointment instantly evaporated the moment I stepped through the doorway and caught a glimpse of the inside for the first time.

I’ll never forget that moment; it was an otherworldly experience. There was so much to take in all at once: the glorious, tomb and memorial-laden walls, the white and black checkered floor, the awe-inspiring stained-glass windows, the ceiling that I swear opened up into the sky. The high altar off in the distance. The choir seats around one of the corners (the Abbey is shaped like a huge crucifix). The worn letters on the tile that marked the spots where so many people were buried. The richness of all the detail. It was overwhelmingly majestic. History has a way of making things so regal and glorious. This Abbey was no exception.

One of the Abbey workers looked suspiciously at me as I, in a daze, wandered over to where they were handing out audio tour guide devices.

“Where are you from?” he asked, bringing me out of my own little world almost instantly.

“Um…” I’m never sure what to answer for this question. Arizona? The States? “The U.S.?”

“I figured. You’re smiling, you are. All you Americans are always so happy. It’s the happy country.”

And he handed me my audio device and I was automatically moving away from him so the people behind me could get their devices before I could tell him that I was happy because I was in Westminster Abbey, for God’s sake, and that America had a surprisingly high number of unhappy people, but did it matter at the moment? I wasinside Westminster Abbey. Who wouldn’t be feeling happy and privileged to be here?

I walked as slowly as I wanted through the Abbey, gazing at everything, soaking in every detail, listening to my little audio device that told me details about the coronation chair, the choir (“quire”, as it’s spelled), the tombs (including Queen Elizabeth’s and Queen Mary of Scots’s!). It turns out that those guys knew what they were doing when they requested that pictures not be taken inside the Abbey; I am actually very glad I wasn’t able to take pictures. I wasn’t focused on my camera, or getting the perfect shot, or making sure I captured every little thing. I was able to give my undivided attention to the Abbey.

Walking down the same aisle countless monarchs have walked down, being in the same space as some of the oldest and most influential kings and queens of England, made me feel like royalty myself. I truly did feel like, as Alanis Morissette worded it in one of my favorite songs, “a princess on the way to my throne, destined to reign, destined to roam.” I kept thinking of the beautiful Princess Kate (yes, I know she’s technically only the Duchess, but I think of her as the Princess) and how she walked through the same space I did today in her stunning wedding gown. I thought of the future of the Crown and of all the coronations that would take place in this same building. It gave me chills. I absolutely love the royal family and I love following their history, so it was very humbling to see so much of it today and exciting to think about what it will be like in the future (namely, when the next king is crowned and when the royal baby is born soon!).

I got lunch at a little café in the Abbey next to the gift shop. It was extremely busy but everyone was very nice and the food was good. I had to wait a little bit for my bill because there were so many people my poor waiter had to serve, so a different waiter hurried over to my table as soon as he could to pick up my debt card.

“Sorry ‘bout the wait,” he said, beaming at me. “We’re so busy, but I still had to hurry over here to beat out the other lads to take care of your check.”

“Oh, is it easier to take a debt card than cash or something?” I asked, not understanding.

“No,” the waiter said, winking at me.

Oh. For a 21-year-old, I can be pretty naïve sometimes.

After taking some more pictures of the outside of the Abbey, I got back on the Tube and headed to Tower Hill in order to see the Tower of London. I had expected a lone tower – what I got was an entire fortress, and it was incredible!

One of the professors that had accompanied us during the London part of our study abroad trip had advised me to go straight to the Crown Jewels when I got to the Tower, so after looking around for a few minutes, I went to find that particular building. And holy crap – the line was absolutely insane. In the end, I waited over an hour to get inside. I feel like it went by pretty quickly, though; I stood in line contentedly reading my book I bought at Westminster Abbey about Prince William and Kate’s royal wedding. Don’t judge me. Plus, it was an absolutely beautiful day.

When I finally got to the threshold, one of the ladies working there very nicely asked me to put my camera away. Again, I was disappointed, and again, moments later, I was glad that I couldn’t take pictures. My hour-long wait to get inside very quickly became worth it.

Swords. Scepters. Orbs. Spurs. The royal robe. And the crowns… there were so many stunningly extravagant, crowns that once sat upon the heads of kings and queens of the past. The rooms we passed through were dark, and soft lights shone upon these crowns in their glass boxes which illuminated every precious jewel on them. Let me tell you, I was nearly blinded by the glittering. They were beautiful. I liked reading about the history of the jewels on the sides of the buildings as well. I really loved the metaphor that was pointed out: the passing of the jewels between monarchs represented the passing of authority. There was a video of Queen Elizabeth II’s coronation ceremony. I loved watching it. She looked so regal and strong and beautiful sitting on her throne and eventually striding down the aisle.

Next to the Crown Jewels building there was a shop dedicated to them that I didn’t dare go in for fear of wanting to buy every shiny thing available for me to buy. Instead, I went to the famous scaffold site, where people such as Anne Boleyn and Catherine Howard were beheaded. I overheard a tour guide telling others that when Anne had been beheaded, she requested a French swordsman to do the job since she feared a slow, agonizing death at the hands of one of the executioners that would, apparently, often get drunk and have to chop at the victim’s neck multiple times before the head came off.

After quickly stopping in the gift shop and getting dinner, I got back on the Tube to get home. I knew my way back well enough to not have to consult a map, and I even managed to help another lady find the right train for the station she wanted to be at.

Tomorrow is my last official day here. I’ve spent most of this evening in the common room with some of my study abroad group and our new French friend, talking about our trip, being sleepy together, and planning to work on our papers tomorrow at a café. I don’t think it’s going to hit me that tomorrow is really it until I’m on the plane Monday afternoon. There’s just so much to take in.

On another note, I think I’ve figured out why my lungs have been hurting so much for the past three days or so: people smoke so much here. I can’t avoid walking through clouds of smoke. I smell it all the time so I must be breathing it in all the time. That’s one thing I’ll be glad to come home to: a smoke free environment.

One more day. How is it almost the end of this trip already?