I have absolutely no idea where this year is going. It sounds so cliché to keep insisting that I blinked and suddenly found myself four months into 2015, but that’s truly how I feel. With full time work (read: 31 horses to take care of) and then some, full time school, friends and family and a boyfriend and a kitty and an apartment that needs to be cleaned and a refrigerator that needs to be filled, the only time I can catch my breath a little is when I sit down to watch an episode of Game of Thrones. (I didn’t want to jump on that bandwagon, but after giving the first episode a chance now I can’t stop watching them.)

And so, I am very grateful for the moments that slow things down for me.

In my line of work, several of the horses I take care of have medical issues. One of my geldings, a gray Arabian named Studley, was found tied behind a dumpster as a baby, having been gelded by his previous owners with no tranquilizers and a knife. We suspect that he was weaned too early from his mother and didn’t get all the nutrients he needed from her milk, because his immune system is terrible, and as a result of this abuse, every single summer since he’s been at the ranch he gets horrible things called summer sores. Summer sores are essentially scratches or bits of nicked skin on horses where flies bite, enlarge, and use to lay their eggs. They become nasty, oozing, open sores filled with maggots.

Delicious, isn’t it? The hands-down grossest thing I’ve ever had to do at that ranch is pick maggots out of Studley’s shoulder.

Well, the sores come back every year when the heat begins and the flies return. A few weeks ago, the big sore on Studley’s shoulder returned and I picked a maggot out of one developing just under his right eye last week.

Long story short, we called our vet immediately to try and nail the sores as fast as we could, and she and her assistant came out on Monday to inject the sores with a steroid that would reduce inflammation. 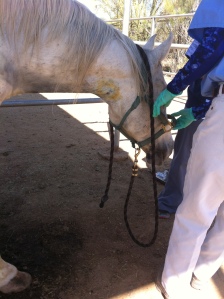 Normally during the morning I’m running around getting things done: Turning horses out, dolling out mashes, doing necessary medical care, cleaning and organizing, doing chores, etc. I spent most of Monday morning standing with the vet and her assistant by Studley’s side.

To backtrack, Studley is what our entire ranch calls a punk ass. He is a total pain to take out of his stall since he throws his head up and grabs the halter in his teeth when anyone – I or any of the volunteers – tries to put it on him. It often gets so bad that I have lightly smacked him in the face to get him to stop flinging the halter around on more than one occasion. I’ve yelled an exasperated, “Studs!” many, many a time when I’ve caught him misbehaving. He is a goofy boy – a loving, happy one, but very ornery, to say the least.

Knowing this, our vet sedated his punk ass so she’d be able to stick needles in his sores (including the one less than an inch from his right eye) without fear of hurting him or anyone else in the vicinity. Thirty seconds after the sedation, Studley was high as a kite. On a horse, that looks like a thousand-pound animal standing with his head hanging down, legs wobbling, and almost completely unmoving. And on a very energetic horse – albeit a punk ass one – well, it’s unnerving, to say the least. Let’s just say every time I see one of the horses sick, or in pain, or sedated the way Studley was on Monday, it is a sharp, almost painful reminder of the fathomless love I have for each of them.

The vet and her assistant stuck needles into the sores for the injections, and the one under his eye oozed blood all down his face. Poor Studley didn’t react, just stood miserably with his head down, blood dripping from his nose onto the ground. The vet and her assistant left when their work was done – the vet giving me some very helpful pointers to relay to the owner about ways to help control the flies this summer – then I left one of my employees in the pen to make sure Studley didn’t fall over while I ran to the tack room to get a bucket of water and a washcloth.

And then, as thousands of other stupid tasks called my name, I did what any other person on that ranch would have done – I sat on my heels (you NEVER fully sit down on the ground around a horse, even a sedated one), put my left arm around Studley’s face as best as I could, and slowly, lightly began to wipe the blood away with the washcloth in my right hand.

“I’m so sorry, baby boy,” I kept murmuring over and over. It wasn’t fair. None of this was Studley’s fault. He didn’t get a say in the neglect he had to go through as a baby, but for the rest of his life he’ll battle summer sores and all the medicine, injections, and vet visits that come with them. But Studley was so out of it that I’m pretty sure he didn’t even know I was there or that he was a horse or that he looked like he’d just gotten the shit beaten out of him at a bar. He blinked slowly and glumly as I dipped my washcloth in the water again and again, taking my time getting the blood off, being as gentle as I could.

It’s so easy to get caught up in how wild and crazy these horses can be – and in fact how wild and crazy life can be – and how I so often get pissed at everything for not going exactly the way I want it to go, dammit. It’s so easy to insist upon a strict schedule in order to accommodate everything, to get mad when things take up two and a half minutes more of my time because that just means something else I have to do later on has to suffer. That’s how I’ve felt lately, anyway. Like I have to keep moving in order to condense a 50 hour day into 12.

But as I stood there with one of my best friends under the sun who needed me on that Monday morning, it occurred to me that the world around me was still moving. And even if everything else I had to do that day had to be postponed until tomorrow, or next week, or next year, the world around me would keep on moving.

I knew before then that time never really stays still. But as I stood there with Studley for a long time, cleaning his face, kissing his nose, rubbing his neck as he slowly started to come back around, I realized that every now and then, if you know how to apply the brakes, it’s okay to make it slow down for a moment.

You are currently reading Slowing Down Time at Shorts and Snippets.