If a heart attack were ever to visit me during my 20s, this would have been that day.

I woke up in our Washington D.C. Airbnb somewhere around 8am (6am Arizona time). Alex was exhausted and feeling a little under the weather after walking seven miles around in the cold the day before, so I let him sleep in while I packed up, tidied up our Airbnb, and took the Metro to the airport to pick up our rental car that I had reserved several weeks before. It was at Reagan National Airport, which meant an easy ride on the Metro, and I thoroughly enjoyed the trip that cold morning.

Call me crazy, but there is something so peaceful and liberating about navigating a huge city by myself. I absolutely love it. I love getting lost in the crowds of people (so long as I’m not claustrophobically close), the landscapes, the sweep of constant movement and noise. Working with horses has trained me to be constantly aware of my surroundings so I’ve come to rely on my own intuition to keep myself safe.

And so I got myself to the airport, found the right rental parking lot, figured out the correct office, and picked ourselves out a nice little Toyota Yaris for the journey up to New York City. Once I’d signed my life away and got out of that airport, I was every driving instructor’s dream as I zipped through our nation’s capitol a few miles under the speed limit, driving through 47 construction zones, a hundred merging lanes, eighteen roadblocks, and enough pedestrians to overtake a small country.

I parked outside our Airbnb (parallel parked – yas!) then we packed up the last of our luggage, left the keys in the mailbox, and headed out of D.C. I was so sad to leave, but really looking forward to the drive (oh, if I’d only known then…). We’d routed a course up to New York City that would take us through Philadelphia so we could see Independence Hall.

As we drove up to Baltimore, I actually remember thinking that it wasn’t going to be so bad. The trees were beautiful shades of reds and yellows and oranges, we were comfortable and warm in the car, our spirits were high, and we happily listened to songs we’d danced to at the wedding.

Here’s the thing, though. The east coast likes to lull you into a false sense of security. 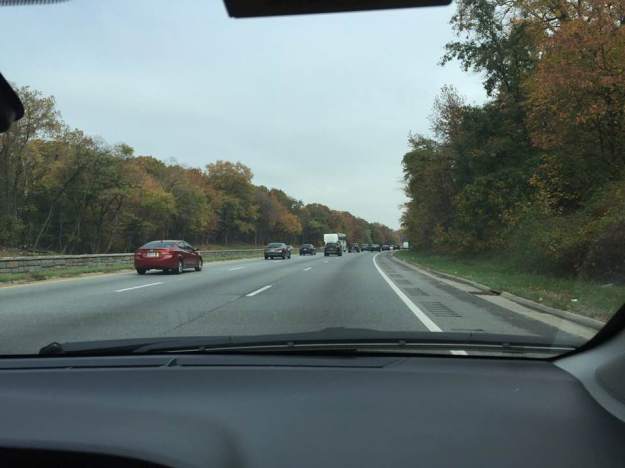 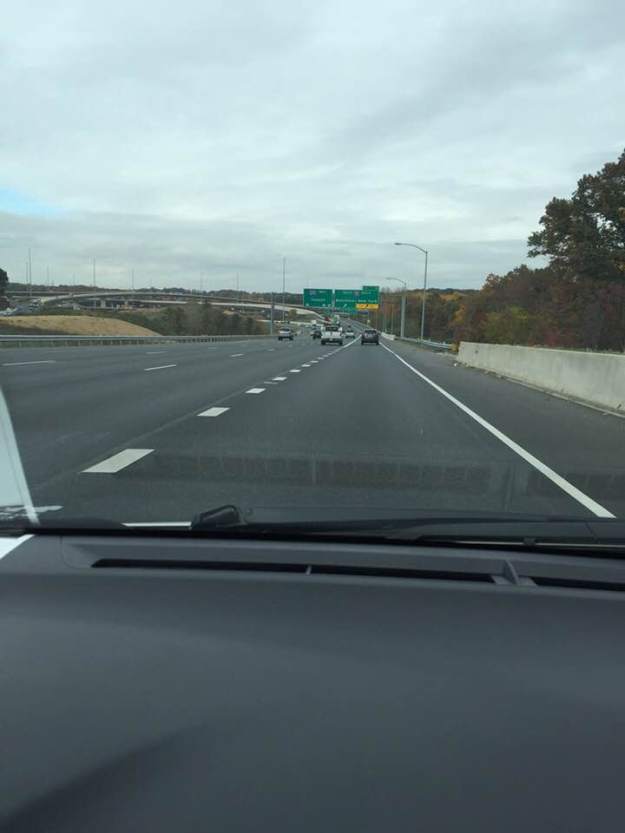 We drove through Baltimore and I got a small taste of the brutality of East coast drivers while trying to turn into a shopping center where we’d found a Panara. (God forbid you wait for a gap in between cars to make a left turn.) We ate lunch, then decided we didn’t want to be icicles in NYC and ran into a nearby Walmart for some warm clothes and gloves.

Then, we began the drive up to Philadelphia. The freeways were starting to get more complicated with lots of exits on both sides, not just the righthand side, and I was noticing more traffic and screeching stops and swerves and honks. But, Alex navigated us to the exit that would take us to Independence Hall, and I forgot about bad drivers as we approached the iconic structure. 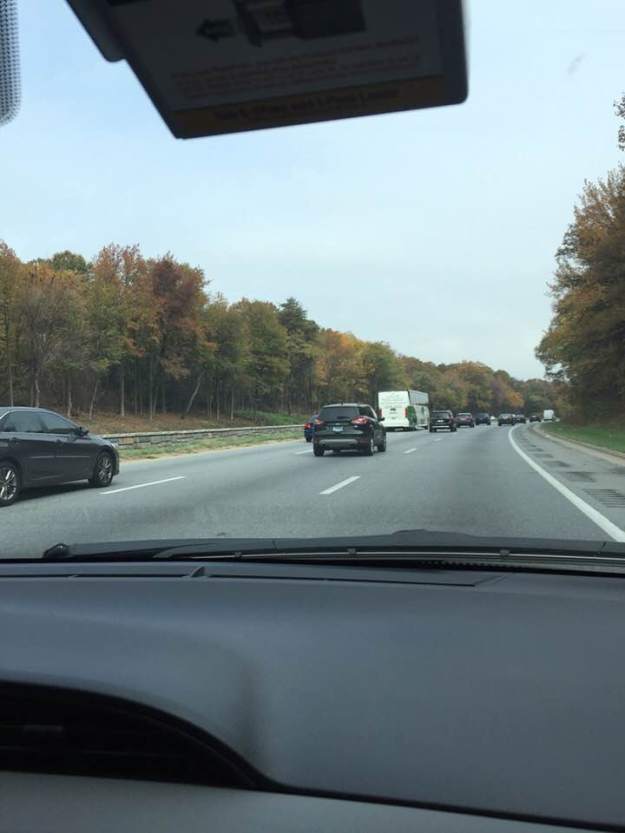 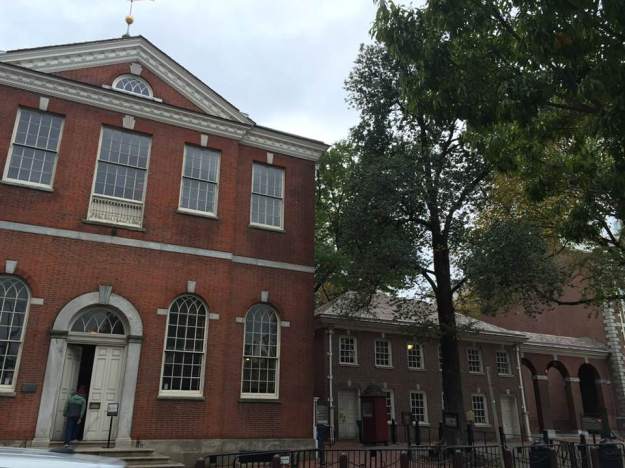 I’d convinced Alex to make a pit stop in Philadelphia, and I was absolutely ecstatic to be there. I’m a history fanatic and have always been drawn to the American Revolution, and, you know, Independence Hall kinda played a big part in it.

Excited, we parked a few minutes before 3pm and walked into the visitor center. As we entered, we read on the signs that tours to the Hall were free, but they required tickets which could be picked up at the front desk. So, we got up to the front desk around 3:10 and asked for tickets for the next tour.

“The last tour of the day starts at 3:20,” the attendee said, “and the last tickets are already gone.” Then, before we could register what she’d said, she studied us for a beat and asked, “How fast can you walk?”

Alex and I looked at each other. “Uh, pretty fast, I guess.”

The attendee reached into a drawer and pulled out two passes. “These guys didn’t pick up their reserved tickets. They’re the last two. If you hurry, you can get to Independence Hall [a block and a half away] by the time the last tour starts.”

It’d been meant to be! Thrilled, we thanked her then busted a move out of the visitor center into the cold and power walked to our destination. Into sight came what we’d come so far to see: Independence Hall! 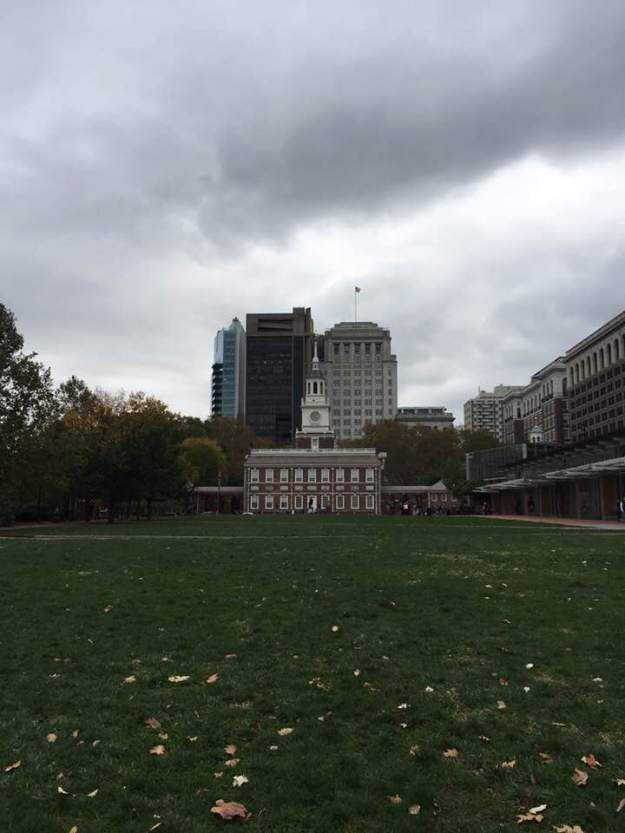 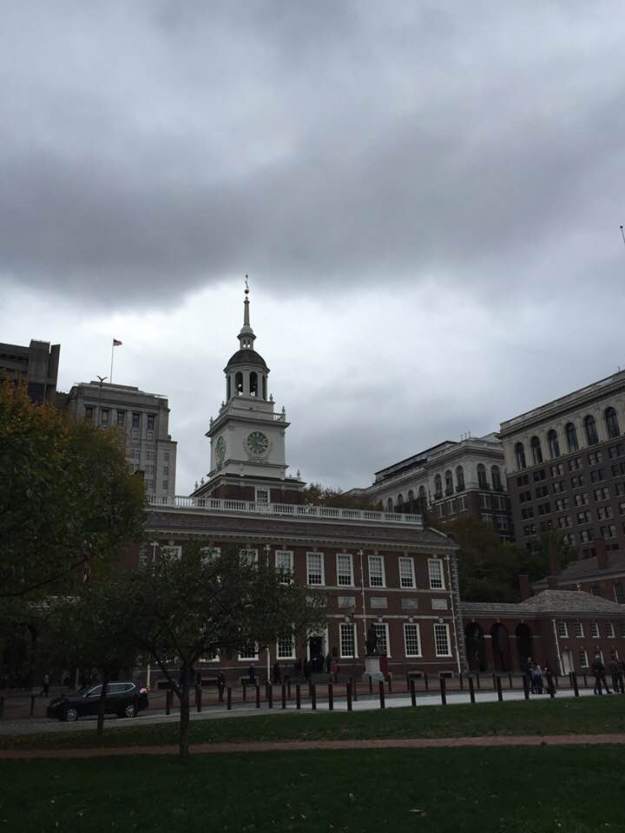 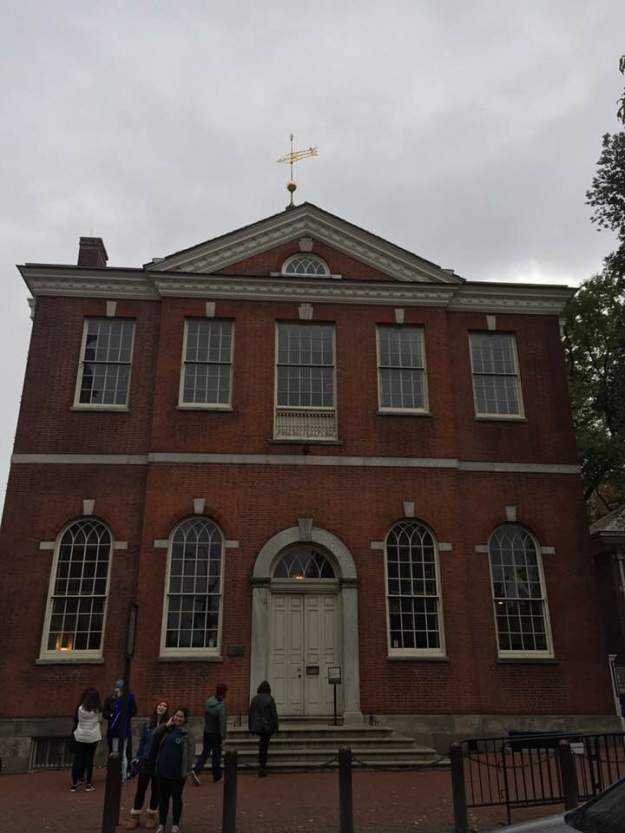 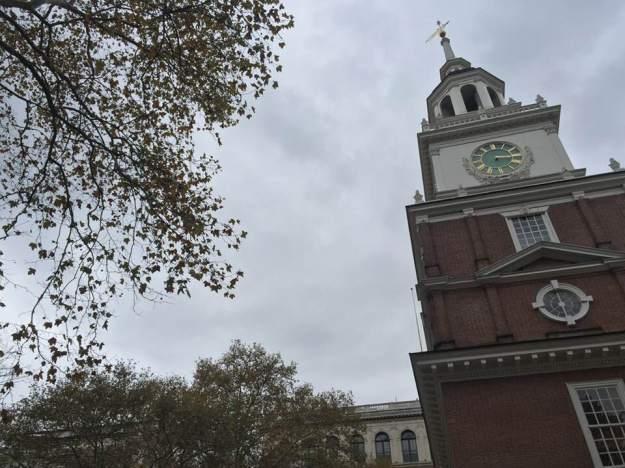 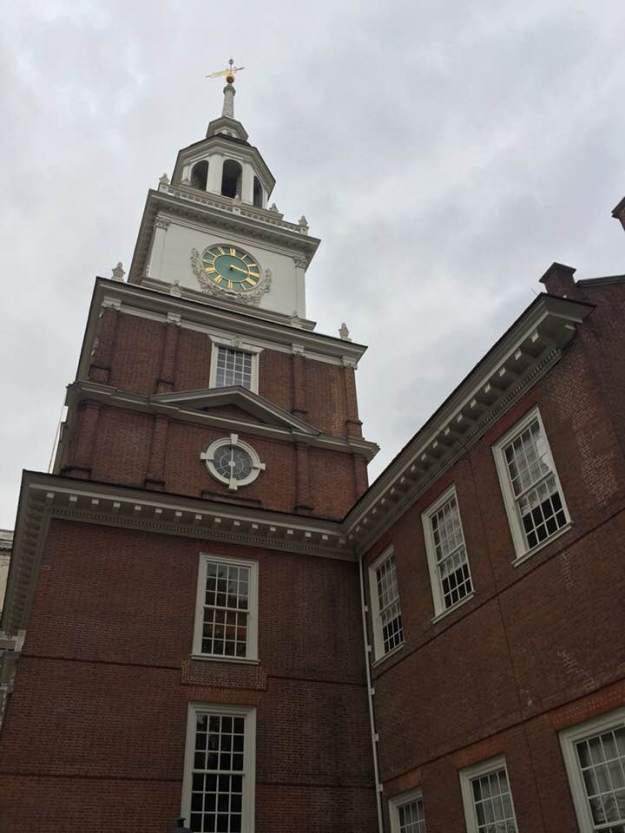 I remember thinking it was a bit smaller than what I’d expected. But – so, so cool.

We got in line with a small crowd of older folks and people our age with small children and only waited a moment or two before we were ushered inside an adjacent room.

I got the biggest kick out of our tour guide, who took history fanatic to the next level as he sat us all down prior to setting foot into the Hall and quizzed us on our knowledge of the Articles of Confederation and the signing of the Declaration of Independence. Before we left he made mention of the several hundred-year-old wood of which the building was constructed and urged us not to put drinks on surfaces or lean on structures.

I’ll let the pictures do the talking. 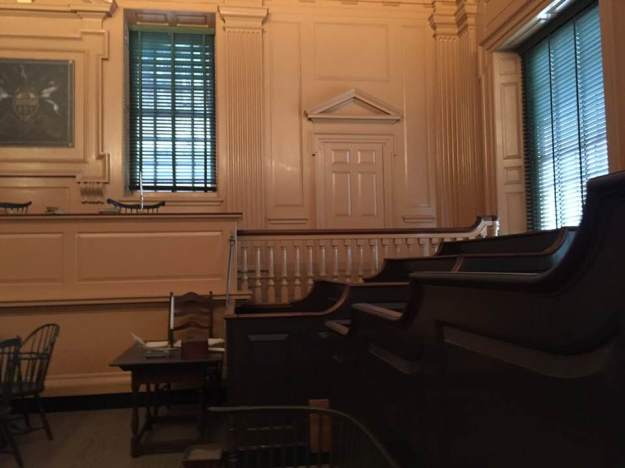 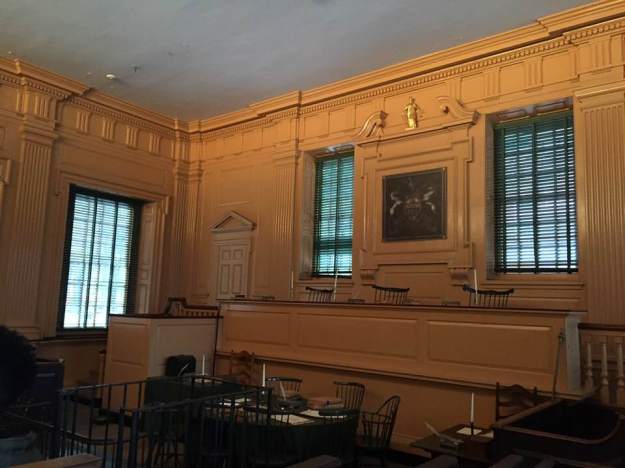 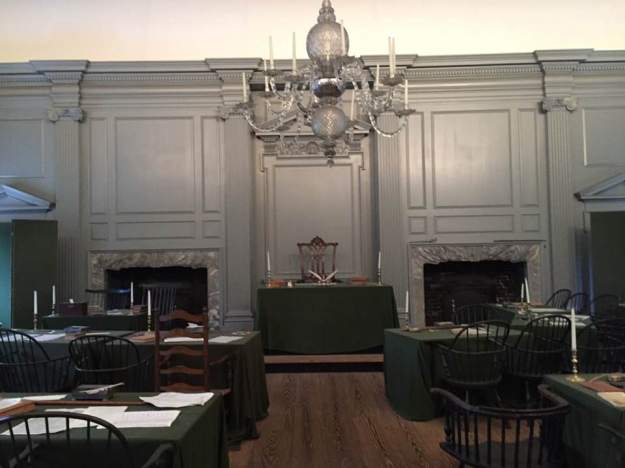 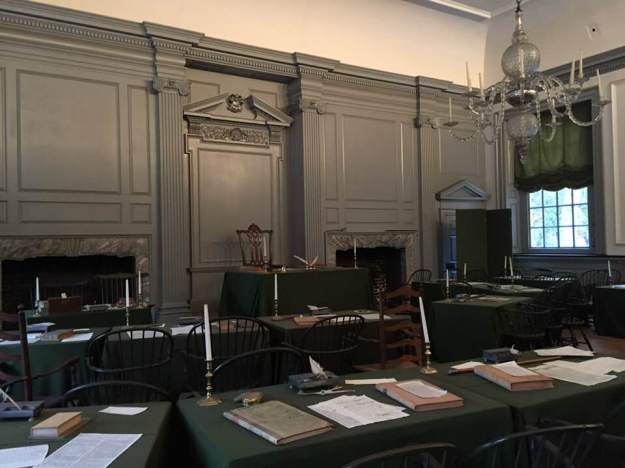 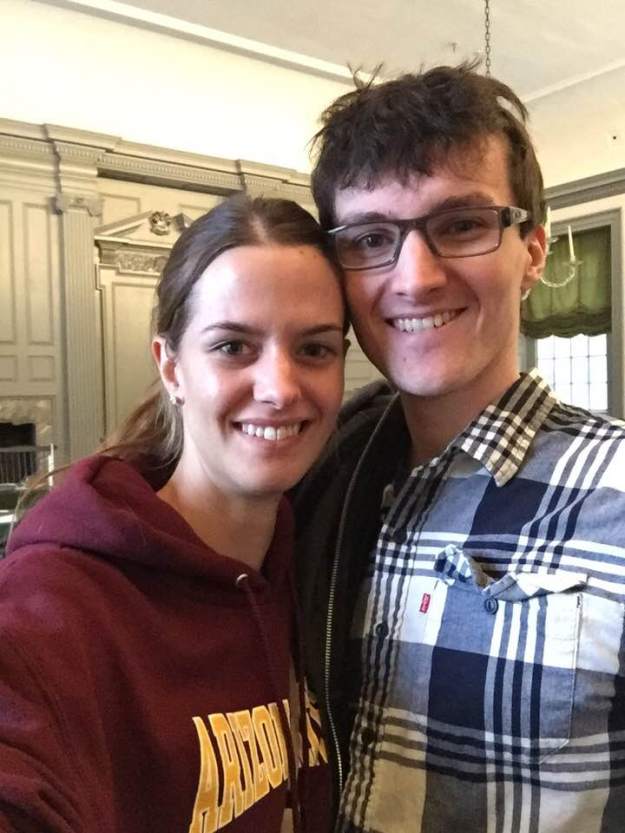 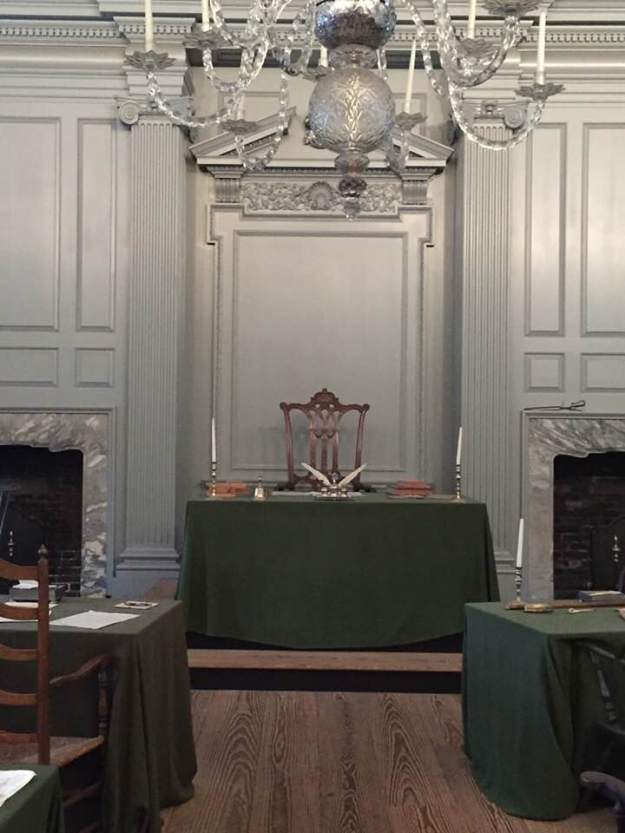 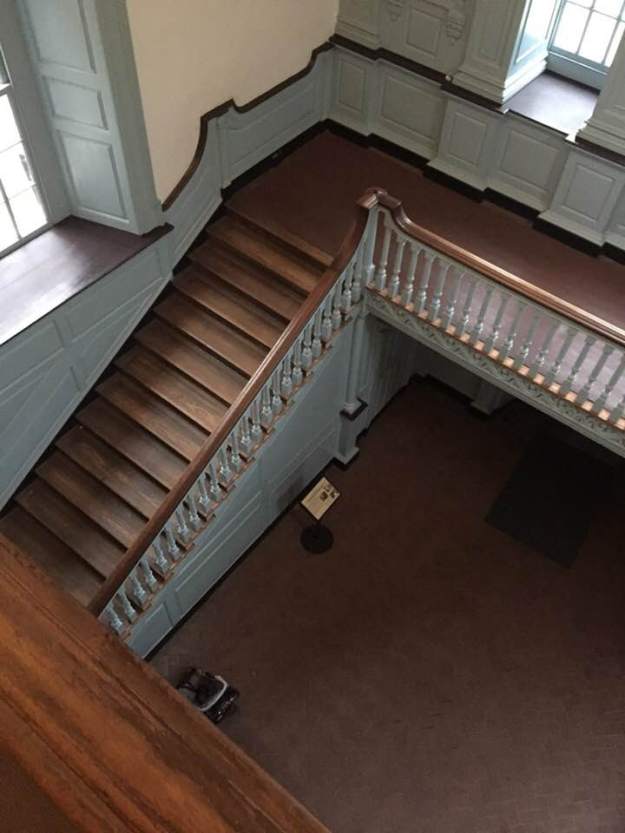 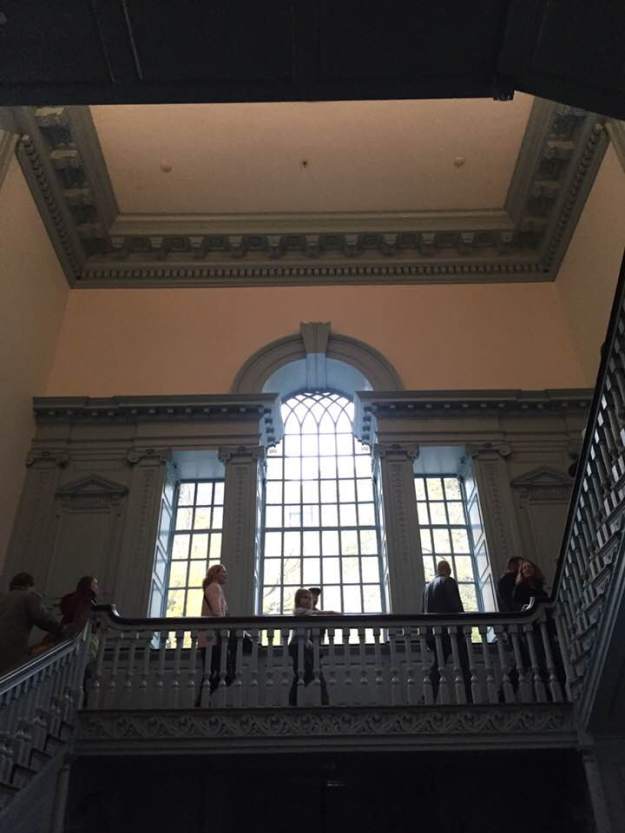 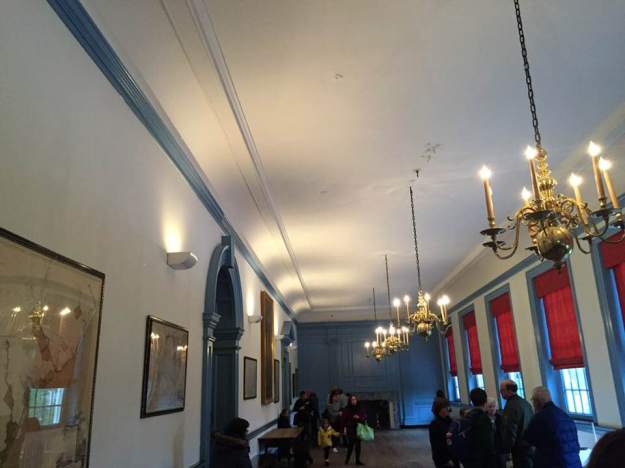 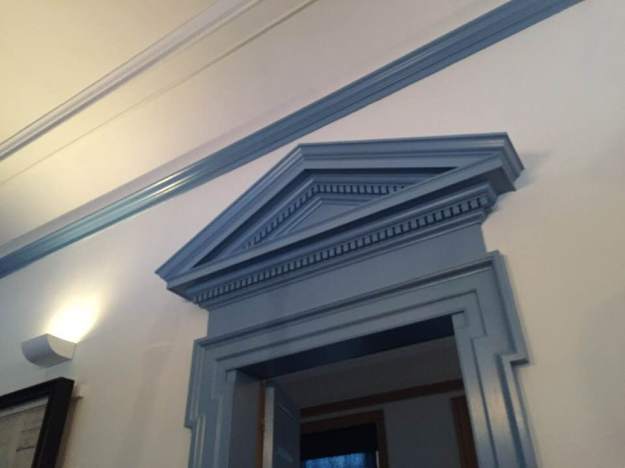 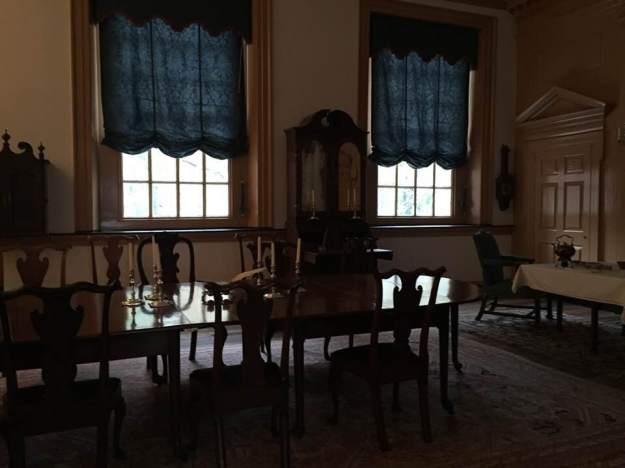 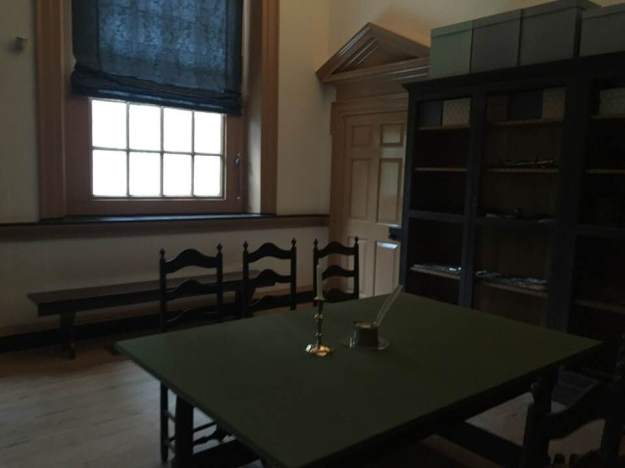 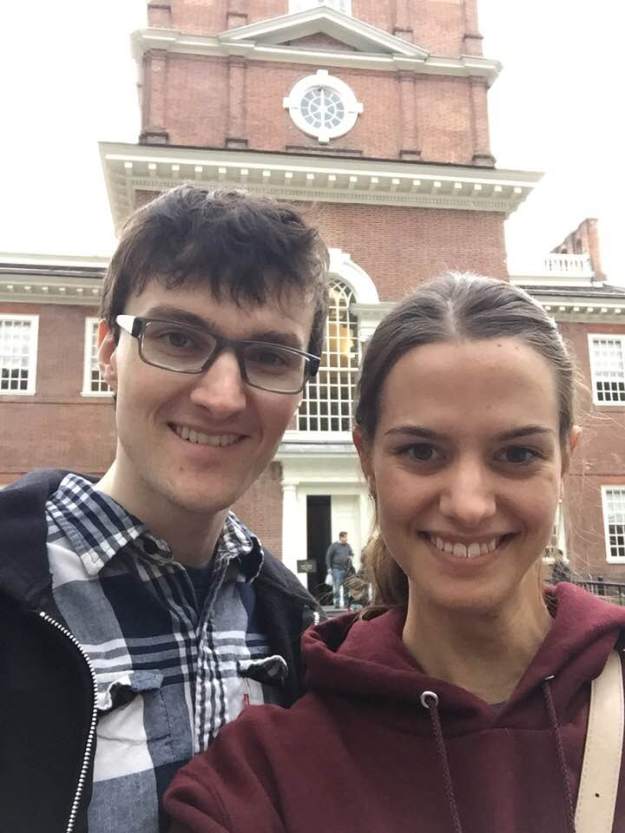 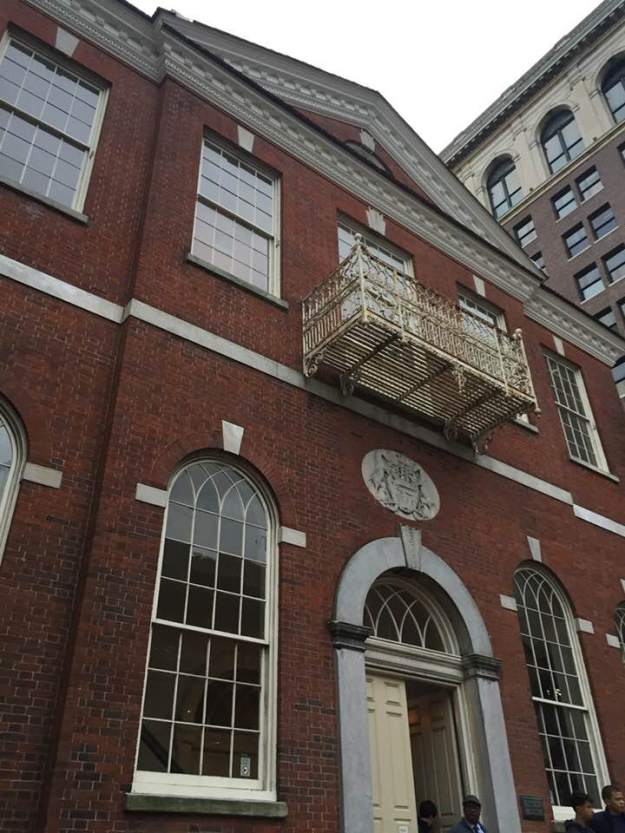 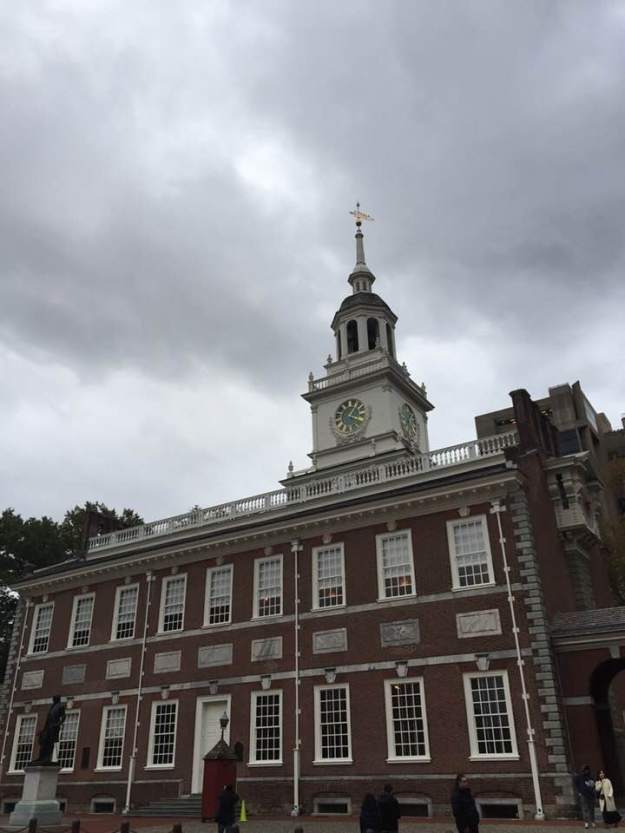 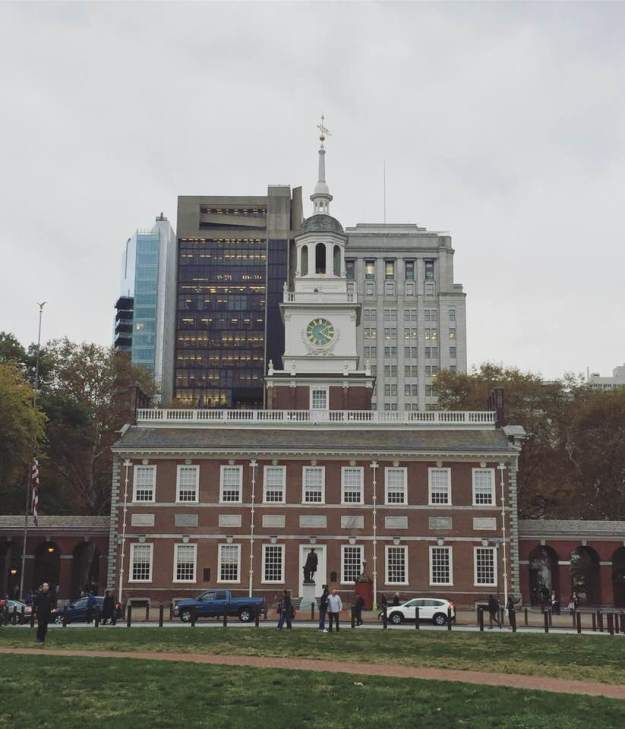 You can see as many pictures as you’d like of different structures that embody so much of history, and it is simply not the same as standing on the same ground, taking in the same surroundings.

After about hour, we peeked into a building across the street that held the cracked, original Liberty Bell. 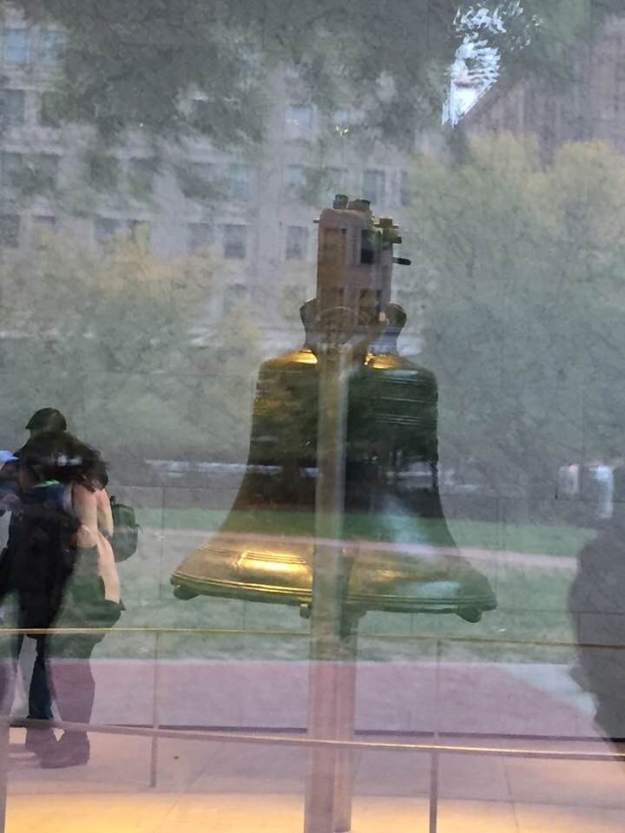 Then, because we were short on time, we grabbed some last shots of Independence Hall and booked it out of Philadelphia. As we continued on our journey north, it occurred to us we hadn’t gotten Paddington Bear in a shot with the Hall! Next time.

It was cloudy and gray and all kinds of traffic closed in as the trees melted away and made way for industrial grossness. As the clouds above started to darken slightly – indicating that the sun was setting – we crossed onto the Jersey Turnpike.

Stupidly, around that time I insisted we listen to Simon and Garfunkel’s ‘America’ for the line “Counting the cars on the New Jersey Turnpike”. If you haven’t heard the song, it’s a slow, soothing, calm tune that is probably more appropriate for a quiet and relaxing drive in the countryside.

No, instead I should have been listening to some thing like this. It was on the New Jersey Turnpike where all hell broke loose.

I can’t even remember specifics. The traffic was just complete madness.

For an hour I slammed on breaks, swerved, hit brakes again, honked, and fielded completely batshit crazy people driving like it was the apocalypse and zombies were after them on mopeds. Because it was my name on the rental lease, Alex couldn’t drive. So he mapped out our route and yelled out directions – though these frequently turned into warnings as he saw cars and trucks flying towards us from the right while I’d be focused on the pandemonium going on to the left.

We crossed into New York (I think?) and while traffic slowed a bit, it was just as bad.

Finally, finally, we were ten minutes out from the airport, where we were to drop off the rental car.

Cars flew around us in all directions. Turns, twists, lane changes, necessary exits materializing four lanes across from us with ¼ mile to go, lanes that ended suddenly… navigating the insanity while battling New York traffic is something I won’t soon forget. There were no laws, just chaos. Everyone turning and swerving and honking and screeching and weaving all at once. I was scared shitless. And I am an Arizona driver and I handle 1,000 animals for a living.

At one point Alex and I were both yelling, him directions, me questions (“Do I turn here!?” “No, next one!” “Which next one?!? There’s like five exits!” “Hold on I’ll ch—watch out!!” Cue me screaming as the person in front of me slammed on their breaks.)

One time I tried to merge over into a lane since mine vanished into thin air and the guy somewhat behind me in the lane over saw my blinker and sped up to close the gap so I couldn’t get in. Pissed, I swerved at the last second so he had to break to let me in or else crash into my car. I honked, he honked, I honked again, he honked back, and I honked more until Alex told me to stop.

Then, finally, we got to the stretch of highway along which lay the car rentals. All 2 billion of them, all with different directions and signs and exits nanoseconds apart.

“I can’t do this!” I shrieked as I narrowly missed a swerving car to our right and braked to avoid hitting a second.

We were both yelling as we flew into the correct parking lot, triumphant, me determined to get the hell out of the car as fast as I could. We screeched to a halt and I nearly cried with relief.

The attendant came out to greet us.

I banged my head on the steering wheel.

Finally, we got out of the car, got our things, paid plus an extra fee for not filling up the tank (worth it), and got on the SkyTrain towards the subway station that would get us closest to our Airbnb. I honestly felt dazed. That entire SkyTrain ride – and the following subway trip – was a blur as my racing heart finally begin to calm down. 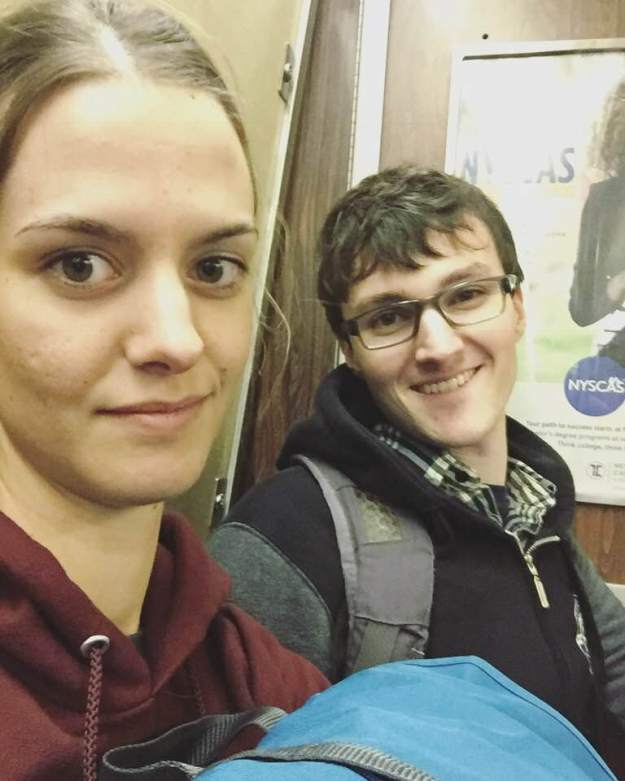 We finally got to the Airbnb, dropped all our stuff, and went back out for some food. Our Airbnb host had recommended a restaurant, but when we got there it was small, loud, and dark, and my anxiety spiked just standing waiting for a table. I asked Alex if we could get food to go and he was all for it.

So, our first night in New York was spent at our spacious kitchen table in our Airbnb, stuffing ourselves with food and being thankful for the warmth, for not being hungry, and for the fact that we’d survived a 225 mile trip on some of the most dangerous roads in the country.

“Next trip,” I told Alex as we fell asleep that night, “we’re laying on a beach, and doing nothing.” And that’s exactly what we plan to do.

Next up: our final three days in New York City!