Ahwatukee to North Phoenix: Our Move

Kitty, boyfriend, and I are moved into our new apartment, and we are all both thrilled that the move is over and thrilled to be in our new place.

I went into this bound and determined to make this move as painless as utterly possible, because moving has always been a bit of a sore spot with me. My family and I moved six or seven times in three years when I was 12 to 15, and each move was something along the lines of traumatic. Needless to say, when the moving boxes came out a few months ago, so did lots of ugly crying and painful memories.

But then I color-coded the boxes, so it was okay. 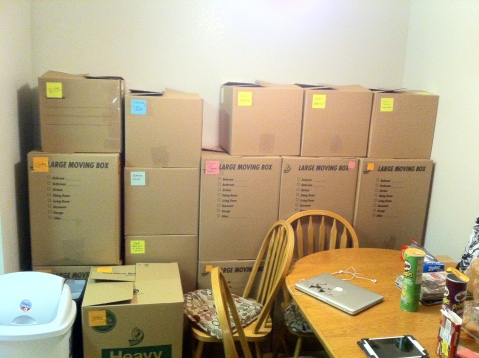 This move really was different than any other move I’d been through before. Moving into the dorms in college was a whirlwind of adrenaline and excitement. Moving back home a year later was both a relief and a downer (but mostly a relief). When I moved in with Alex last October, he’d already been settled in the Ahwatukee apartment we’d picked out together for a few months. Because we moved in at separate times, we still had a relatively clear line as to what was his stuff and what was mine.

But this apartment? Everything in it is ours. And getting everything into it went as smoothly as moving can go. In fact, I might even say it was relatively painless.

One reason our move was relatively painless? Movers.

When Alex and I sat down to plan the logistics of moving, we both debated for a minute or two as to whether or not we could save money and just rent a truck then move our stuff ourselves. One look at my three full bookshelves (and a couch and two desks and a coffee table and a kitchen table and two dressers and a bed and a TV stand and and and) and knowing the fact that we were on the third floor both ways quickly made up our minds.

Our movers saved us. They were outrageously expensive but they were worth every. single. penny. 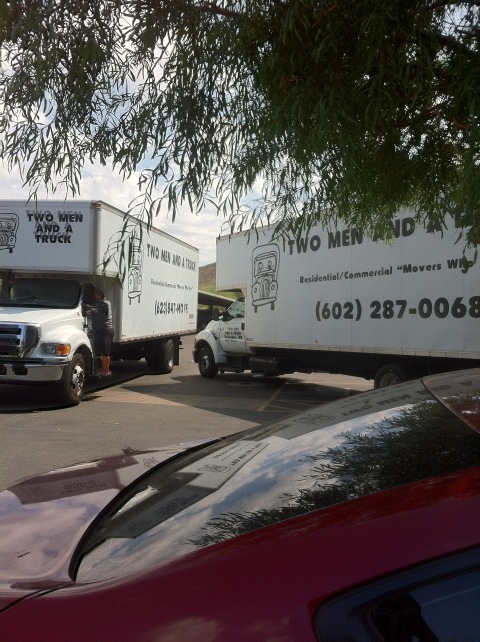 Best picture ever – there was another “Two Men And A Truck” team there moving another family into the same complex! 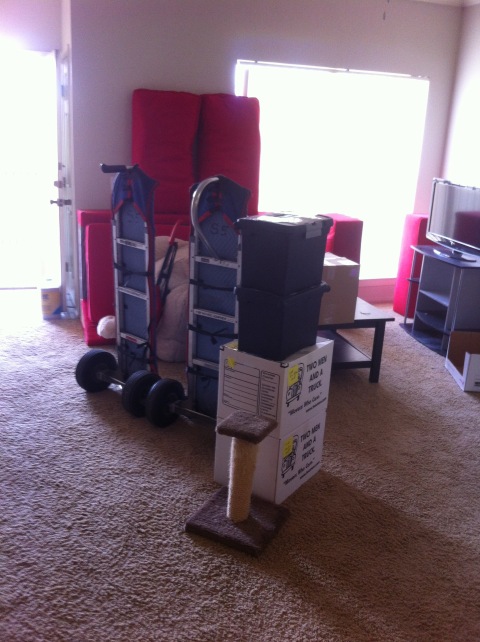 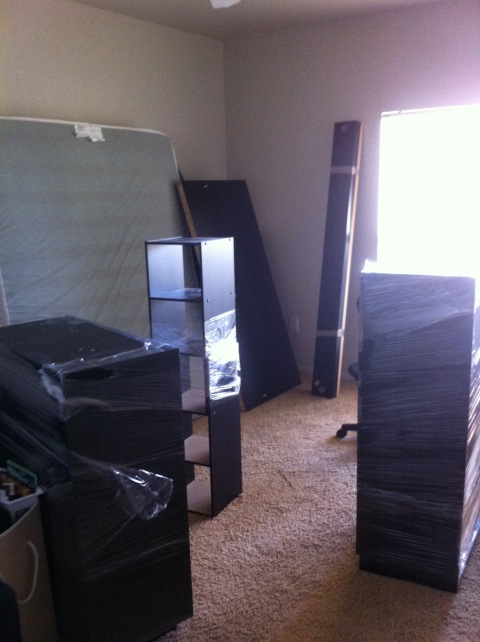 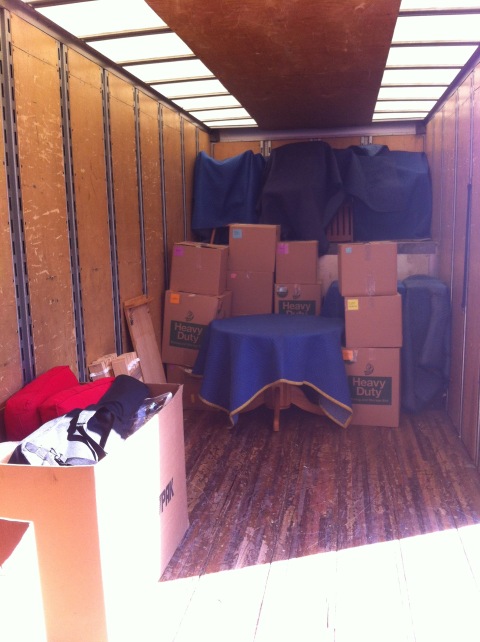 Color-coding each box was something my mom did every time our family had to pack up and move. Because mommies know everything, I copied her and it was the best thing I could have done. Our movers were great about putting the right boxes to the right room which is saving us a world of hassle now as we’re unpacking and don’t have to worry about dragging any boxes anywhere.

One thing I didn’t do was tape the boxes shut on top. I folded them and figured it would be good. But one of the movers took a look at them on moving day and said we’d have to tape them up, otherwise they’d be crushed when they started to stack them. Oops. Lesson learned.

Our movers got to the Ahwatukee apartment at ten to eight. Prior to that, we put Gypsy in the bathroom with her litter box and carrier and shut the door so we could keep the front doors open. I think the worst part of the entire day was listening to her cry behind the closed door as she tried to figure out what was going on.

But the movers left the new place a little after 1pm, and not long after kitty was happily exploring away. 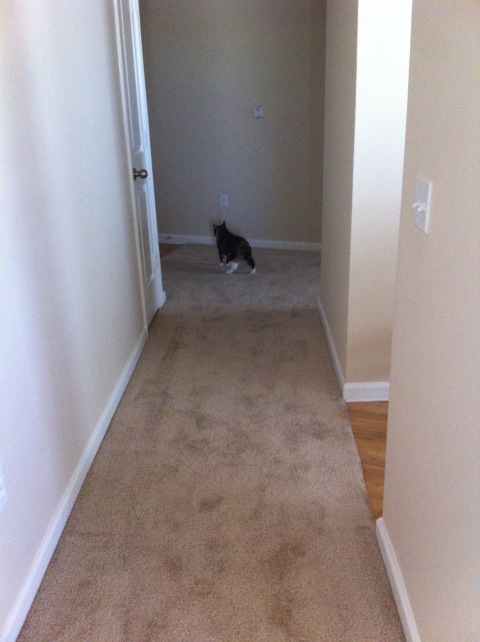 I did learn a few things the hard way. Number one: It would have been a good idea to take off the necklace Alex gave me that I have worn every day for almost four years before we started moving. The chain snapped when it got caught on a box corner as I was setting it down. Luckily I was able to find the key charm and we’re going to find another chain for it soon. 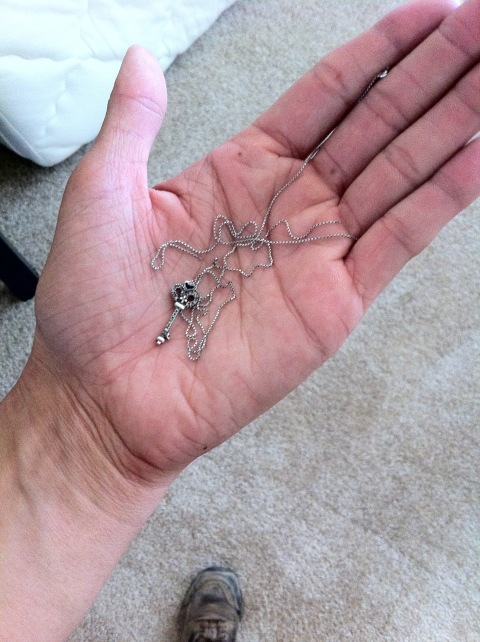 Another lesson learned? It probably isn’t a good idea to eat ham that’s been sitting in the car for the hour-long commute up to the new place, because even if you packed it in with the cold stuff, it’ll still go bad and you’ll still taste it twice.

Honestly though? Moving day was a good day. We even met our neighbors, a very sweet engaged couple with two cats and a dog of their own. I met one of the women as we were going up and down the stairs with boxes (she was very nice to let us pass first!) and the other when she knocked on our door in the evening to introduce herself and also ask if we had a bottle opener. We ended up chatting for a while about our pets and her work. I’m really looking forward to getting to know them!

As for this apartment, Alex and I are still loving it. We were living in a 700 square foot one-bedroom, so two bedrooms and two bathrooms is like a legit palace to us. We get a kick out of the fact that we have to actually search for each other now since before, we could stand in one spot and see the entire apartment. Even as I’m sitting in bed writing this now, Alex just trekked over from his desk across the apartment to say, “I hate being so far away from you!”

Alex is excited that he essentially gets his own bathroom and that our microwave has a spinning plate. He’s not excited that he can’t use the kitchen being too small as an excuse to not help me cook anymore.

I love that I have my very own office now. Half of my job I do from home, and it’s going to be much easier and more efficient for me to work when I don’t have papers spread out over my bed or my kitchen table. Also? I love that our bathtubs are enormous and that we have so much storage space. 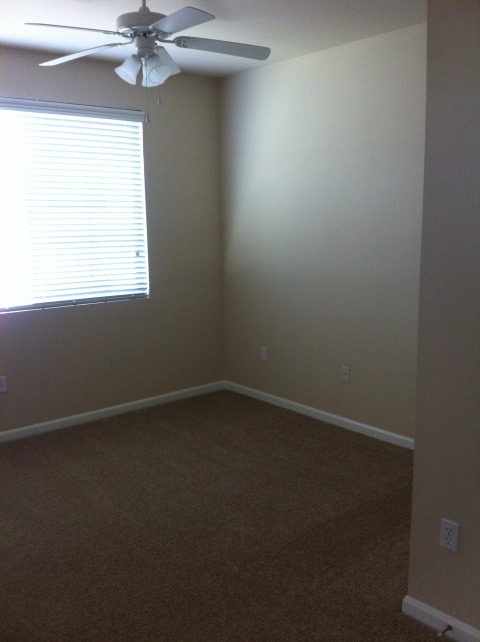 As for kitty? She is just in heaven. She’s been prowling around the place (and on top of the cabinets) like she owns the joint, which I suppose she does.

This morning, she woke us up because she’d hopped onto one of the boxes just under the window in our room and wanted to see out. I got up and opened the blinds for her and she happily sat down on the windowsill to watch the sun rise. 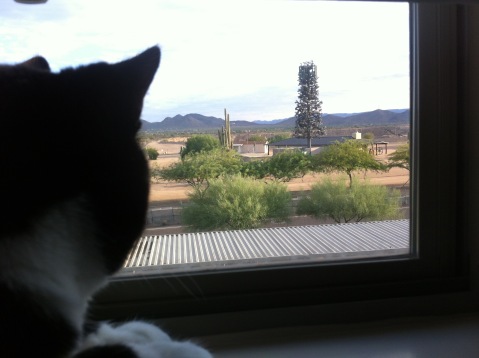 We live next to a quarry, but Alex and I are convinced that fake tree is a spy tower and there’s a secret lab underneath that building.

Now that we have some extra space, Alex and I are seriously thinking about getting her a brother. We’ve wanted to for the better part of a year, but we’re just not entirely sure if she would handle another cat well. We constantly ask her if she wants a sibling, and this is pretty much her response:

Meanwhile, it’s back to work for me tomorrow (my weekdays run Saturdays through Wednesdays) but we’ve managed to put together our furniture and unpack a little. We’ll be unpacking for quite some time!

It is so, so good to be home back in the area I know and love – and only 15 minutes away from work as opposed to close to an hour. I’m actually looking forward to my drive tomorrow, and I’m excited to keep making this apartment more of a home for us.

(Just a heads up, for anyone interested, I plan on writing another post with quick tips and tricks for an easy move in the future!)

§ 2 Responses to Ahwatukee to North Phoenix: Our Move

You are currently reading Ahwatukee to North Phoenix: Our Move at Shorts and Snippets.