This past month disappeared in a nanosecond. My last blog post featured our move to North Phoenix (exciting, I know) and since then, I unpacked and attempted to make our apartment more of a home, worked around the clock for the days my boss was out of town, turned 24, flew to the Homes for Horses Coalition Conference in Texas, had a friend visit from New York City stay with us for a few days, and all the while started the process of transitioning the ranch into the fourth quarter of our year (read: LOTS of new changes, developments, programs, and fundraising). Needless to say, I blinked and we’re in October.

I have about twelve blogposts I want to work on and post soon but tonight, I wanted to dust off this blog in order to introduce you guys to the newest member of our family….. Theon! 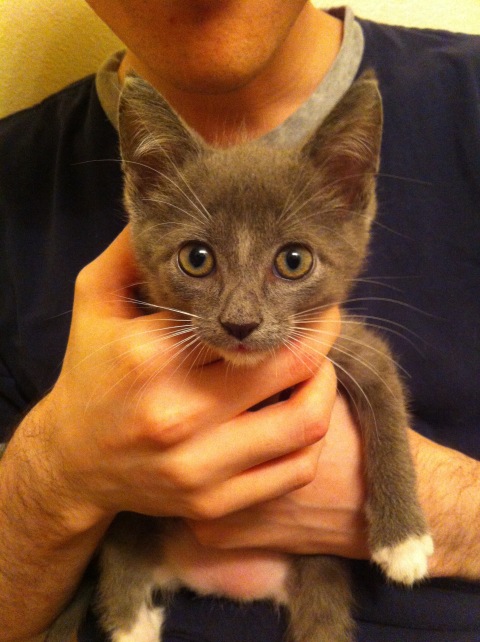 Alex and I had been talking about getting another cat for months. For the past six weeks Alex had been looking at cats online and we’ve always looked at pictures posted by different shelters, but we never actually made the leap to go look at any of them. Our first concern was that Gypsy wouldn’t want another cat in the house. On raged the debate: Would she like a playmate? If so, how old? What kind? Male or female? We had no idea.

Today when I got home from work Alex had found another shelter online and was looking through the kittens they had up for adoptions. Something felt different as we looked at this batch of kitties. It was pouring rain outside as we sat trying to figure out what we wanted to do…. Finally we decided to brave driving in the storm to go take a look.

We got to the place (the Arizona Humane Society in the Biltmore area) and looked around at the kittens. We talked to the nice ladies there about Gypsy, and which one we thought would be a good fit for a six-year-old ornery cat who was incredibly playful but still the queen of the household. They showed us to the little room where people can go to play with the animals and started bringing us kittens one by one.

The first one was a male named Dexter and he was absolutely wild. Alex and I had a blast playing with him but he was absolutely bouncing off the walls – far too energetic for us and Gypsy. The next one was a less-playful but still fun female, but while she was cute, she didn’t really speak to either of us.

Next came this little gray kitten – eleven weeks old – who nicely started to play with the wand toy that was in the room.

We liked him a lot, just like we liked the other kittens that had been brought in the room. But then Alex picked him up and cradled him in his arms so he lay on his back with his four paws in the air. He does this to Gypsy all the time, who tolerates it for about 30 seconds before squirming to be free. The other kittens wiggled away, too.

Not this kitten. When Alex gently flipped him on his back and held him to his chest, this little guy curled up into a little ball, happily looked up at Alex, and mewed contentedly. And when he was back on the ground, he wandered right into my lap and looked up at me with huge kitten eyes.

We looked at a few other orange kitties from the same litter and very nearly fell in love with another one, but when we walked out of the room and looked at our little gray friend again, it was pretty obvious who had picked us. We thanked the ladies who’d helped us, told them we’d be back, and went to dinner so we could sit and think about it a little more.

As we walked around looking for a place to eat, we started thinking of names. Nothing really came to mind for a gray cat until Alex said Theon Greyjoy (a Game of Thrones character, for those of you who don’t know). As I started to shout NO he laughed and pointed out how the sky was gray (almost unheard of in Arizona) and it was perfect how we were bringing Theon home on a stormy, gray day and almost before we could totally decide if we were actually bringing home another cat we were referring to him as Theon. He was never anything else.

As we sat eating dinner and talking about how we couldn’t believe we were bringing home Theon the same day we decided to just go look at kittens, we laughed over how we were going to tell our family and friends about him. Because we don’t plan on posting an actual pregnancy announcement within the next, oh, ten years (if ever), we decided to have some fun with telling everyone we were adopting another cat.

We went back to the shelter (to the delight of the ladies who had helped us), signed the paperwork, collected Theon, and blissfully headed to the car. And while we were at Petsmart picking up another litter box, some more food bowls, kitten food, and a few new toys, I posted this to Facebook: 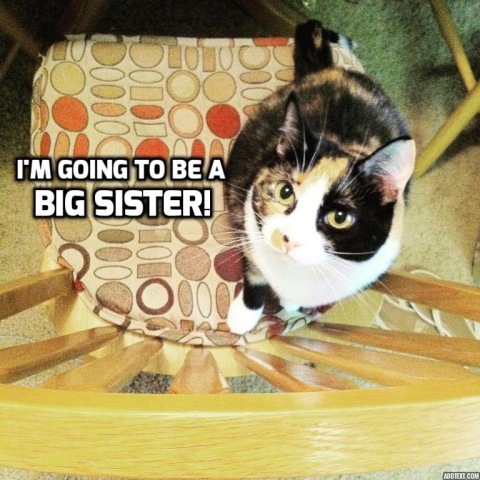 I got messages, texts, and phone calls almost right away demanding to know whether I meant a human baby or a kitten baby while Alex and I laughed during the drive home then eventually from the bathroom in the office where we set Theon up with his new things. 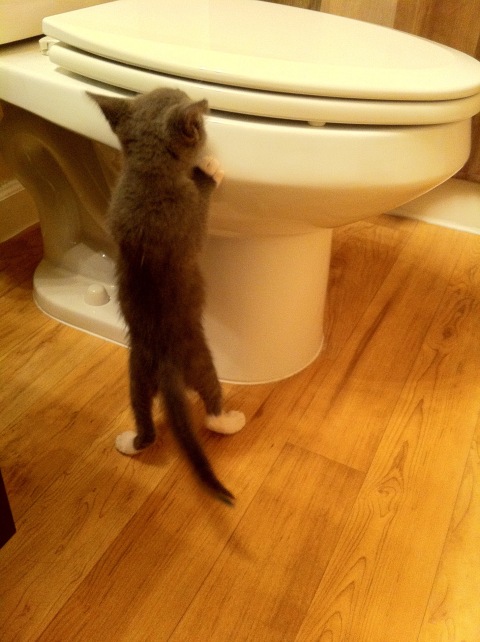 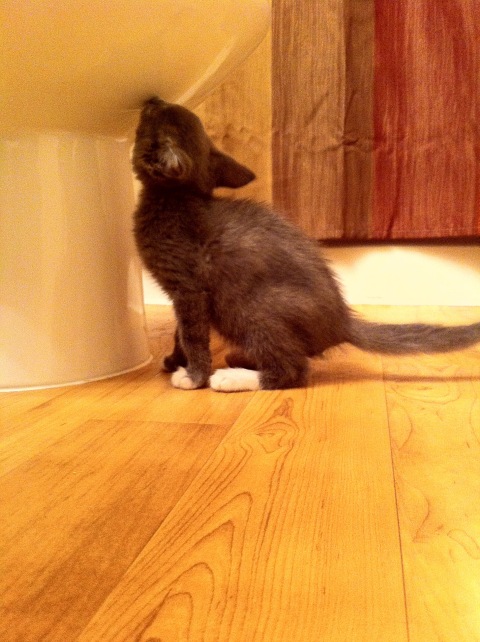 We put some of Gypsy’s toys in the room that she doesn’t play with and he’s had a ball so far. He’s so playful and so eager to jump into our laps and swat playfully at Alex’s shoelaces or my hair.

And gosh, he is sensitive and just so. sweet. While we were driving, Theon cried and cried from his cardboard carrier the Humane Society had given us, so Alex took him out (I was driving) and held him carefully against his chest for the entire way from the shelter to Petsmart, then eventually from Petsmart to our apartment. Both times, Theon stopped crying the moment Alex picked him up and settled contentedly against his chest. And as we were halfway home, he actually fell asleep in his arms.

Gypsy already knows something is up since she hears his little cries from the bathroom every now and then. We’re going to keep the doors to the office and the bathroom shut between them for at least a week or two, then we’ll slowly start to let them peek at each other. If we’re patient and let them get used to each other on their own time, I think these two will be the best of friends some day. Also we’re hoping for some super cute moments of them playing together and even Gypsy maybe grooming baby Theon.

To our Theon – we are so lucky you are ours. You captured our hearts the moment we saw you and we can’t wait to watch you grow. Everything happens for a reason, and while we had no idea we were going to bring you home today, even though we weren’t expecting to suddenly have two kitties, you changed our minds just by being your sweet, loving self. You’re with us for good, sweet baby boy. Welcome home.

You are currently reading Introducing…. Theon! at Shorts and Snippets.