10 Quick Tips for an Easy Move

I read somewhere once that moving is one of life’s biggest stressors, up there with death, divorce, and illness. My boyfriend and I recently moved an hour north to a different apartment (Ahwatukee to North Phoenix), and I thought I’d share some tips that helped us along the way plus a few tips I’d picked up long ago when my family moved six times in three years. I hope this helps you get through a move that is as painless and stress-free as possible!

1. Fill up the boxes. As I was packing all my books and other heavy items, I thought that I’d save everyone a load of hassle by filling the boxes about ¾ of the way. They’d be lighter, I figured, and thus far easier to move.

Enter the movers on moving day, who attempted to stack all my boxes on top of one another on their dollies and found that a lot of the half-full ones ended up crushed due to the weight of the boxes on top. Empty space = bad. Fill the boxes, heaviness be damned. Otherwise you’ll hastily be wrapping boxes with tape in order to hold them together for the journey.

2. Tape the boxes on top. Coming from the same I’ll-save-everyone-a-bunch-of-trouble department, I folded the box tops neatly rather than tape them shut after I’d finished jamming stuff inside them. This, I figured, saved us a bunch of tape and would keep me from going too crazy during the unpacking process. Again, I was wrong. The movers couldn’t quite keep the exasperation out of their voices when they (politely and professionally) informed me we’d need to tape all the tops on top in order for them to move them safely. 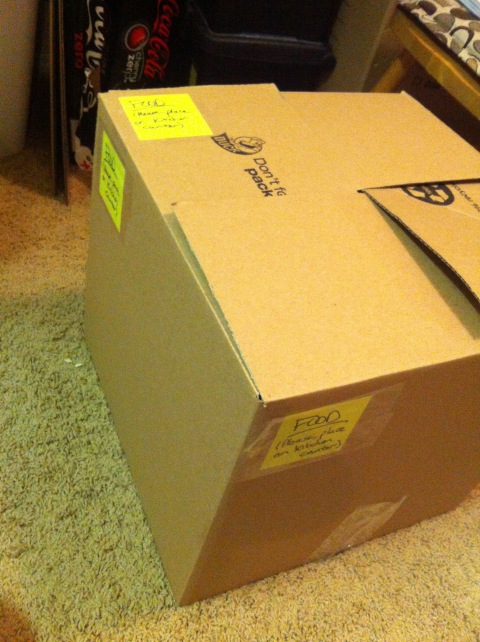 In short? As far as those boxes go, fill them all the way to the top and then tape them shut.

3. Color code everything. As you’re packing, tape sticky notes to each box and clearly label what is inside each of them. Separate each box by room according to its final destination: Kitchen, bathroom, bedroom #1, etc. Then, in your new home/apartment, label the rooms so the movers can clearly see where each box is supposed to end up. 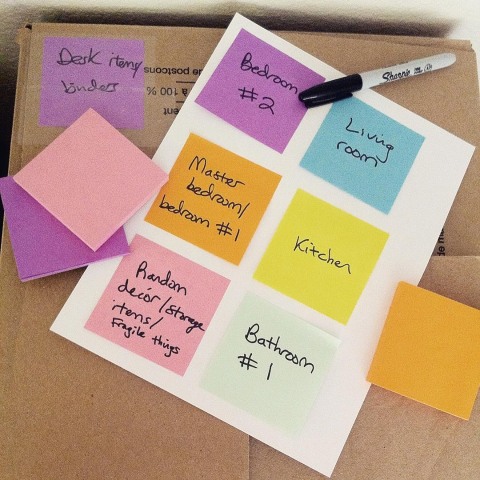 This saves an enormous amount of hassle when you’re unpacking. Instead of hunting all over the house for a specific box containing your plates and silverware, you’ll be able to find it easily in your kitchen. And for goodness sakes, put those sticky notes on all four sides of the boxes as well as the top. Once they’re stacked up against the wall or on top of each other, you’ll never guess which one is which just by glancing at them if the side with the sticky note attached is hidden.

4. Put plastic bags around everything questionable. Spices? Lotions? Vinegar? Wrap it up before putting it in a box. You will not regret it.

5. Get your keys prior to move-in day. Sometimes this isn’t possible, but if it is, it’ll prevent even more stress. 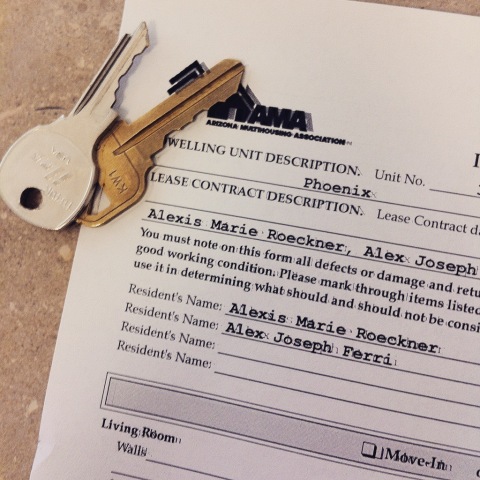 At our first apartment, my boyfriend and I went into the office on move in day and our movers had to wait in the truck until we had signed our lives away, received our keys, and located our unit within the complex. Then, they followed us up the stairs and waited yet again while we took in our apartment for the first time and decided how we wanted to arrange the furniture.

Figure out how you want your furniture arranged, what each bedroom will be, etc. prior to move in day. And going back to the color coded boxes, get to the apartment ahead of the movers if you can and label each room so your movers will know which boxes go the second they walk in the new place.

6. Hire movers. Repeat after me: Thou shall hire movers for thy move.

If you only have a few pieces of furniture in addition to some boxes and are moving ground floor to ground floor in the same city, by all means rent a truck and grab a few friends to help you out. It can be done (and I have memories of helping to move college friends in and out of apartments to prove it).

But for all other situations? Namely, if you are moving a bed, two night stands, three bookshelves, a kitchen table, six chairs, two dressers, a couch, two desks, a TV stand, a coffee table, fourteen thousand boxes, and a partridge in a pear tree down three floors and up another three? Movers. Movers all the way. They take 90% of stress (and chances of potential injury) out of moving. I cannot stress this enough: They are worth every single penny.

7. Keep a toolbox on hand. Before the movers get to your house/apartment make sure that one thing is left unpacked: A toolbox complete with different screwdrivers, scissors, packing tape, a box cutter or two, and labeled ziplock bags containing all the bolts, nails, and/or screws from any dismantled furniture. You will use the tools more often during the day than you think.

Example: My boyfriend and I forgot to unbolt one dresser from the wall and he was able to unscrew it during the hasty process of moving thanks to our toolbox being so accessible. Otherwise, who knows how long we would have hunted for the right screwdriver? Yes, I know, worse things have happened. But on move in day, stress can quickly turn small inconveniences into crises.

8. Have snacks on hand. To prevent general grouchiness (and a trip to the ER, if you’re hypoglycemic like me), have some fruit and granola bars out at the new apartment for your family as well as the movers (I also provided Rice Krispies Treats™). Not only do you need to keep your strength up during the day since you’ll be moving up and down stairs far more often than you think, your movers will appreciate the kind gesture. (Just don’t eat anything cold that’s been sitting in a car for an hour. See the bonus tip at the end of this for more details.)

9. Take your jewelry off. This is pure common sense, but I’m including it in this list because I didn’t think to do it on move in day. Behold a necklace that I’d worn every day for almost four years with its chain broken because it got caught on a box corner as I was setting it down:

Again, common sense. Hopefully you have more of it than I did.

10. Breathe. Moving might not exactly be on par with death, divorce, and illness, but it is nevertheless an incredibly stressful time. Rest assured that all your boxes don’t have to be unpacked on move in day or even the day after. Also, rest assured that the world will not end if your new house/apartment looks like an Ikea store for a while. Relax. You made it from apartment to apartment/house to house. Take a deep breath and have fun turning your house into a home!

BONUS TIP: Don’t attempt to take cold stuff with you unless you have a cooler with ice. Better yet, don’t eat anything cold (i.e. deli ham) that has been sitting in your car for over an hour lest you want to spend your first night at your new place throwing your guts up in your glossy, new bathroom sink.

You are currently reading 10 Quick Tips for an Easy Move at Shorts and Snippets.